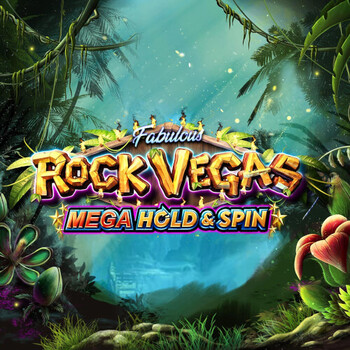 Set in a steamy prehistoric jungle, Rock Vegas is made up of 5x3 reels and 20 fixed paylines. You can start placing your bets from a minimum of 0.20 up to a maximum 100 per spin. It has a decent Return to Player Rate of 96.64%. In the base game, matching symbols pay left to right on adjacent reels, beginning on the left-hand side. We have 10-A royals for the low pays, followed by higher pays crazy beasts, lizards, white tigers, and cavemen. Lastly, Rock Vegas might bill itself as a 'wild slot'.

Rock Vegas' Hold & Spin feature is triggered when at least 3 scatter symbols the base game reels disappear and are replaced by a new 10x10 grid containing only colored rock symbols or blank spaces.

The bonus round begins with 3 respins where all rocks that hit remain locked in place and reset the number of respins back to 3. The action continues until respins countdown to zero, or the screen is filled with rocks. When clusters of 2x2 or 3x3 matching rock symbols are created, they merge to create a large rock, and a random multiplier is added to them.

There's more. Rock symbols may land with little key icons on top of them, which are collected on a trail beside the grid. At set intervals, keys unlock chests to get various rewards. If you make it to the end of the trail, the Mystery Multiplier generates a random number between x2 and x100 which is collected to multiply the general multiplier. When the trail is finished, the feature restarts.

Register to Rock Vegas on Genting Casino, playable on all mobile devices. Limit how much time you spend playing each day by setting a daily time limit.