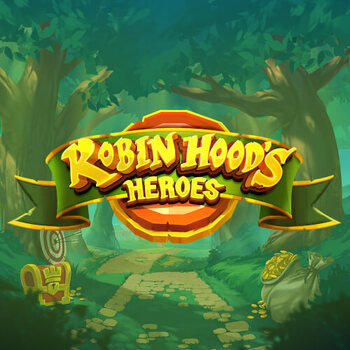 Produced by
Just For The Win
With 10,000 possibilities to win and a 4-5-5-5-5-4 grid, Just For The Win's Robin Hood's Heroes slot is a dynamic adventure slot. You can anticipate Wild Split symbols and a bonus round with all wilds splitting to improve the amount of winning combinations. The main attraction is the Cash Grab hold and win function, which includes 3 hero modifier symbols. The top prize is 5,000 times your bet. Play Robin Hood's Heroes for as little as 0.20 and all the way up to 50 per spin.

Robin Hood's Heroes game includes a thrilling narrative in addition to 6 reels and a 4-5-5-5-4 reel configuration on which winning combinations can appear on 10,000 paylines. Wins occur naturally using a payline system when 3-6 matching symbols land on one of them in an adjacent position from left to right.

The majority of the action takes place in the woods, just like in the Robin Hood tales, therefore the background of the reels is covered in trees and other lush greenery. The backdrop features a distant structure that resembles a castle, while the reels feature items that are connected to the topic.

The game has 10 normal pay symbols, with the four card suits—diamonds, clubs, hearts, and spades—paying the least. Following these, which pay 0.5x the wager for six-of-a-kind, are mugs, knives, hats, Friar Tuck, Maid Marian, and Robin, which pay 0.8–5x the wager for a full payline.

Only the second through fifth reels contain wilds, and there are also wild split symbols. Both of these swap out for standard pay symbols in winning combinations, while the Wild Split symbol doubles the amount of paylines and divides into 2 to 5 wilds.

The RTP for Robin Hood's Heroes slot game is set at 96.05 percent, although operators can choose from lesser percentages as well. When we tested the game, it was quite clear that volatility was high.

Starting bets range from 0.20 to 50, with 0.20 being the lowest and 50 being the largest. Considering the maximum win potential of up to 5,000 times the stake, this might be a touch tight.

When six or more money symbols are visible, the Cash Grab Bonus Round begins, and you have three respins left to use. Each time you land a new money symbol, the score is reset, and on a grid that has otherwise been cleared, both the new money symbol and the triggering money symbol become sticky. You can also come across three hero emblems, notably the Adder, Doubler, and Collector, in addition to financial symbols.

However, the Hero emblems must first be activated in order to become active. Each Hero has a counter that grows with each spin; when the counter is full, the hero symbol is activated. You can use each hero as many times as you'd like during a session once the counter resets. Here is a summary of what each hero accomplishes:

When three or four scatter symbols appear on reels 2 to 5, starting the free spins round, you'll receive either seven to fifteen or ten to twenty spins.