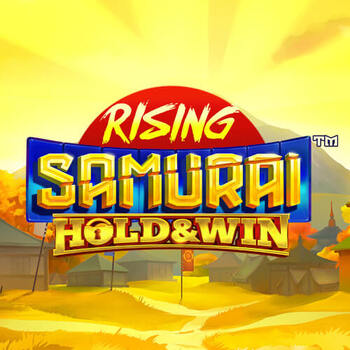 Produced by
iSoftBet
Travel to Japan during the days of the samurai in iSoftBet’s Rising Samurai: Hold & Win online slot game where you are joined by four different Samurai warriors to fight towards some big wins. The Rising Samurai: Hold & Win slot game uses iSoftBet’s Hold & Win mechanic which can be activated by collecting Samurai coins as you play. This can get you some nice win amounts. Not only that, but you can also expand the game board in the game’s free spins feature!

iSoftBet’s Rising Samurai: Hold & Win slot machine is played on 5 reels and 3 rows that can expand during bonus features to varying rows going 3-4-4-4-3. You start off with 576 paylines, but with the game’s expanding rows, you can get up to 3087 paylines! This samurai-themed slot game comes with an RTP of 95.98% and a medium volatility. Rising Samurai: Hold & Win can be played with a bet ranging from 0.20 to 20 per spin and you can win up to 16215x your stake!

As mentioned before, you are joined by four different samurai warriors. These warriors make up the game’s high-paying symbols, with the red samurai being the highest-paying out of them. The lower-paying symbols in the Rising Samurai: Hold & Win game are represented by card royals. There’s also special symbols that can appear on the reels such as the Wild symbol, the golden coin, and the Free spins symbol.

This stunning Japanese-inspired slot game has bonus features such as Wilds, respins, free spins, and other features that are sure to make the game more exciting and keep you spinning those reels. Watch out for the Shuriken Ninja Star symbol as this is the game’s Wild symbol that can substitute for all other symbols in the game except for the special golden coin and free spins symbols.

These booster symbols appear on the reels during the free spins and respins features. These greatly help in boosting your wins and are represented by gold coins with either a pink arrow or a blue X. The arrow booster adds an extra row and the blue booster increases the win multiplier.

The free spins feature of the Rising Samurai: Hold & Win comes with a twist: expanding rows. Activate this feature by landing at least 3 Free Spins symbols anywhere on the reels. You are given either 10, 12, or 15 free spins where you can aim for the Samurai Boosters that can help increase your wins.

Land at least 5 special golden coin symbols and you can activate the Rising Samurai Respin feature where the coins are sticky while the other positions respin. You start off with 3 respins, but you can get more re-spins every time you land another gold coin. You can also find some Samurai Boosters here that can increase the multiplier. There are also jackpots available: Mini, Major, Minor, and Grand which can net you prizes worth 25x, 50x, 100x, and 250x your stake respectively.