Play Rich Wildes and the Amulet of Dead 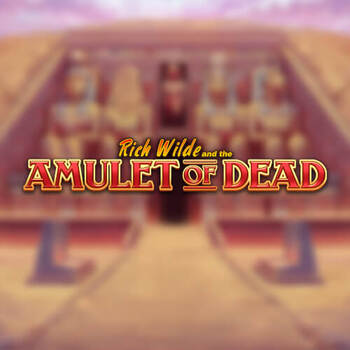 Produced by
Play N Go
Powered by PNG, Rich Wildes and the Amulet of Dead slot offers a bonus game in an Egyptian setting. The beautiful background resembles The Abu Simbel temples of Ancient Egypt. There are several cool bonus features, including the wild, scatter, normal pay symbols and more. The most interesting of them is the expanding symbols, which can award big wins. Explore the ancient Abu Simbel temples in Egypt with Rich Wildes and the Amulet of Dead.

Players can play Rich Wildes and the Amulet of Dead on computers and all smartphone devices. The slot comes with five reels, three rows and 10 variable paylines with stake choices from 1 to 100 coins per spin. The high-volatility game has an RTP value of 96.29%. PNG has ensured the slot has everything it should have, including bonus features, expanding symbols and full screen wins.

Playing Rich Wildes and the Amulet of Dead slot online can lead to decent full-screen wins, thanks to the available symbols. The slot offers both high-paying and low-paying symbols. There are Egyptian-styled 10 to A royals that are low-paying. The premiums are Egyptian deities and artefacts, worth 17.5 to 100 times your bet for a line of five with 10 active paylines.

It's very easy to play Rich Wildes and the Amulet of Dead slot and even players who are beginners won't have any trouble mastering the gameplay. First, you need to select the bet amount from the scroll bar under the reels. The slot also provides Automatic and fast-play options, and players can open the paytable by clicking an 'I' button.

Rich Wildes and the Amulet of Dead

The wild symbol is Thoth, which lands on the second, third and fourth reels only. When the wilds get stacked, they activate the Thoth Multiplier. The first, second or third fully stacked wilds trigger a 2x, 3x, or 5x multiplier sequentially. Thoth Multipliers influence all wins on the activating spin, and they are available in the free spins as well as the base game.

When the scatter Amulet appears on any reel, the value becomes 100x the stake for a line of five. The Amulet acts like a wild, taking the place of any normal symbol to make a win. Landing three or more scatters grants 10 free spins, opening the bonus game. Before free spins get triggered, one of the pay symbols randomly turns into a special expanding symbol.

Special symbols don't need to appear close to each other or start from reel one to form a winning combination. Players also get the chance to activate a gamble feature. Guessing the right colour or suit of a secret card can double or quadruple the win, but be careful - choosing wrong will lose your money. You can play the gamble rounds up to five consecutive times.

Rich Wildes and the Amulet of Dead Jackpot and Bonus Features

Launched by PNG, Rich Wildes and the Amulet of Dead is an Ancient Egyptian-themed fun slot that comes with good visuals, crisp animation, a nice soundtrack and multiple bonus features. The gameplay is very easy, and there are ample opportunities to win big. All you need to do is select your bet amount and join the archaeological adventure with Rich Wilde in Ancient Egypt.