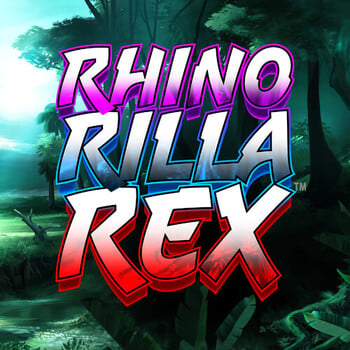 Produced by
Games Global
The Rhino Rhilla Rex game is the result of some hybrid creatures that are absolutely terrifying because of some crazy experiment in an animal lab. As you play Rhino Rilla Rex, it's clear that the slot is inspired by Jurassic Park. There are various creatures on the reels as well as to the left of the screen with a scientific facility in the distance.

Rhino Rilla Rex slot game is a 5 reel video slot with 25 paylines. It comes with an RTP of 96%, high volatility and a maximum win of 5000x your bet.

The three stars of the show are an overgrown gorilla, a similarly supersized rhinoceros, and a tyrannosaurus rex dinosaur. While these three creatures are hellbent on slaking their murderous desire for flesh, you’ll be spinning the reels – and discovering the Rhino Rilla Rex slot online hidden depths.

There are 3,125 ways to win, and the any adjacent pays mechanic means winning combinations can appear anywhere on the reels.

The entire slot looks like it has been shot through a night vision lens and like the player is observing the scene in front of them. Throughout the slot, there is also a scientist lady who appears in a hologram adding to the science-fiction element of this slot.

Surprisingly, the music adds a mixture of funk with a soft tranquil score in between spins. As the reels spin, the music gets louder and more intense building up the atmosphere.

There's nothing too exciting going on during the core gameplay of the Rhino Rilla Rex online slot, but the Team Up Feature and Team Up Bonus spins add so much excitement to the reels once triggered.

At the right side of the reels, there is the spin button and bet level here. Above these, there is a drop-down menu leading to the paytable and other settings that may be needed.

Team Up Feature of the Rhino Rilla Rex slot machine is triggered by landing any combination of the premium beast symbols fully in view. The triggering symbol created a game board with cash prizes, tokens and multipliers. One spin is given and increased by multipliers that land.

There is also the Team Up Bonus Spins feature that triggers when 3 beast symbols are in view fully and if one of them has a golden bonus feature attached. Again, cash prizes, tokens and multipliers land during this mode.

To the left side of the screen, there are four progressive Beast Prizes. If a premium animal lands fully in view, the corresponding Beast Prize gains a token. These include Rhino, Rilla, Rex or Rhino Rilla Rex.

While there is a wild symbol included in Rhino Rilla Rex, it’s only going to be present on the 1st and 5th reels. It can still do some good, helping form or complete winning combinations in a way-to-win system that gives it some extra power.

Play Rhino Rilla Rex at Genting Casino. The site offers hundreds of game titles for you to choose from. And all these titles are optimised for mobile gaming. Meaning the graphics and gameplay are well suited to be played on most mobile platforms. Players can now play anywhere and anytime at their convenience.