Play Reign Of The Mountain King 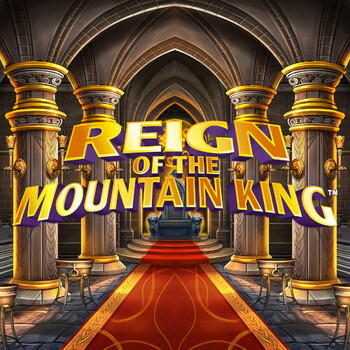 The game is set in the Mountain King’s castle where there are 10 ways to win criss-crossing on the 5-reel, 3-row grid. Playable from 0.10 to 10 per spin, winning combinations are formed when at least three identical symbols land left to right across a payline from the first reel.

The regular symbols include 9-A royals, axes, shields, trolls, and queens. The high pays are worth 6 to 20x the bet for landing 5 matching symbols. The King symbol is the most valuable at 20x the bet for a line of five. The King is also the wild and substitutes for any other symbol in the game. It also triggers features when the right number of matching symbols land. During a normal spin, when there is only one wild in view and it is part of a 3, 4 or 5 of a kind win, the wild awards a multiplier of x5, x8, x64, or x512 the bet, respectively. Respins are triggered when 3 wild symbols land on reels 2, 3, or 4. Each wild symbol displays a multiplier of x1. Respins are awarded when wilds lock in place. If a new wild appears on reels 1 to 5, it also locks, but only wilds on the middle three reels award multipliers. Gems symbols may appear overlaid on regular symbols during respins, and are collected in a meter above the reels. When they hit, every 3 collected activates the next multiplier on the trail with possible values of x2 up to x8 the stake. Whenever a new multiplier is achieved, it is given to all locked wilds on the middle three reels. When more than one wild is used in a win, the multiplier values are multiplied together before being applied to the win. Respins end when no new wild or gem symbols are visible on the reels or the max win is reached.

This game is playable on all mobile devices. Register to Reign of the Mountain King on Genting Casino to start spinning. Set your limits and play within them. Gamble responsibly.