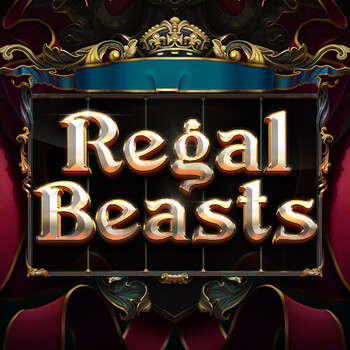 Produced by
Red Tiger
The Regal Beasts slot is an online slot from the Red Tiger game developers. It is inspired by ancient kingdoms and creatures that are mythical. Several of its symbols are represented by beasts. It is easily accessed on mobile devices as well as computers. The game operates on a machine that is made up of three rows, five reels and has ten paylines. This slot game has a medieval theme design. The royal beast is represented by four ancient beasts; that is, Cerberus, lion, dragon, and an eagle indicating royalty. The colours are red, golden, and black. To play Regal Beasts slot, one has to be aware that some set of symbols when combined give rise to a feature known as the Regal spins.

The Regal Beasts slot online has symbols that appear in single, double, and even treble. The wild symbols are accessed through the golden orb. The symbols, as mentioned above, can appear in multiple combinations. The free spin feature upgrades all single symbols to doubles, with the orb appearing on each spin. The result is several wilds that count as doubles as well.

To play Regal Beasts slot online, one is advised to make use of the orb. It is located underneath the reels and it can activate itself at random. A retrigger makes you acquire wild symbols of up to 45 spins, which in turn leads to all symbols being upgraded to trebles. This makes it so easy to make several combinations of each symbol.

The Regal Beasts online slot game has stakes that start from 10p to 10 pounds per spin. The stake button, when selected, plays the purpose of setting the bet level. In addition, the game has over 2000 times multipliers on every spin. It also allows an auto spin from 20, 50 to 100 times depending on the interest of the player.

With it come different pays. Its wins are mostly based on a two-tier bonus, with the wilds paying 200 times for a 15 symbol combo. Landing on a five treble leads to the creation of the 15 symbol combination, therefore having a grand win. The gold lion awards between 1 to 160 times your stake for the wins that start from 3 up to 15.

Regal Beasts slot has medium to high variance with greater wins. The maximum win is up to 2,078 times that of your total stake that is spun. Trebles symbols from free spins are the key to winning big; landing on their combinations increases the wins. Though this feature increases wins, it is wise to be careful because it can lead to monstrous combinations.

The Beast slot offers potential that is decent, though it is not the flashiest game available. With its royal symbols and background sound, we're certain that anyone would be interested in playing this slot with much enthusiasm. Even without the jackpot feature, it avails the player with a chance to win big from the wild symbols and scatter feature together with the free spins.