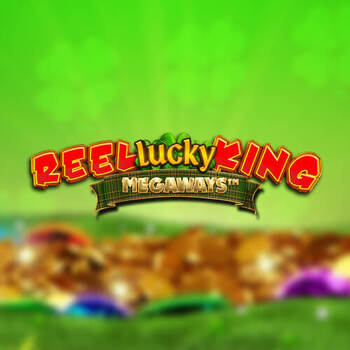 Nothing beats the satisfaction of playing a good old Irish-themed online slot game filled with rainbows and jolly tunes like the Reel Lucky King Megaways!

The Reel Lucky King Megaways highlights its theme by using lit reels, symbols, dings, and the cheerful but regal chap prancing up all over the game grid; composed of 6 reels with up to 7 symbols each and a 4-position reel horizontally spinning all the way up. This game is highly volatile, with a theoretical RTP of 95.56%, and playable from placing a stake from 20 p/c to 20.

Embracing the sense of familiarity in this game, common symbols like cherries, plums, watermelons, 9-A royals, and a pot of gold can be found from top to bottom. To win in this game, a line of six royals with a- 1 to 7.5x your stake while the top premium gets you 50x the stake.

The pot of gold pays the most but a combination of two of a kind pays a smaller amount as well. In this game, horseshoes have a reputation for good luck as they are used as the wild, substituting for any regular pay symbol.

Typical with most Megaways game slots, the highlight of action occurs with cascades after every win, removing the winning symbols so new ones can fall into the spaces. Lit reels, on the other hand, are a classic feature, where up to six reels turn yellow during the base game, accompanied by a ‘Ding!’ effect. These dings are triggered left to right, and one extra reel is lit yellow for each succeeding cascade.

Explore the Irish-themed take on the classic slot game by registering to Reel Lucky King Megaways on Genting Casino! Remember to stay on your gaming budget and play responsibly.