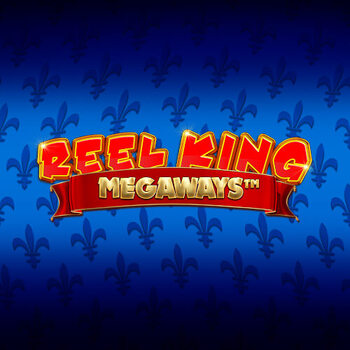 Produced by
Inspired
Feel the royalty in a classic, Reel King Megaways slot. Play and enjoy the free spins bonus round, with limitless win Multipliers and available Cascading Reels. You get the chance to win when either one or six king symbols show up, with the megaways features offering you 117,649 win ways to bank winnings. Continue reading to learn more about the slot.

Reel King Megaways slot is a six reels classic slot game developed by Inspired Gaming. This slot's bet size starts from 20p. In addition, the slot has 117,649 paylines. When you play Reel King Megaways free spins and the base game, all winning symbols are part of a cascade. New symbols coming from the top of the reels will substitute cascade.

During the Reel King Megaways slot online gameplay, the number of symbols found on each reel randomly changes with every single spin. This affects the number of active Megaways. The least is 324 with the slot Reels increasing a complete suit of symbols. The lit reels have the ability to activate the Reel King slot feature, so look out for them.

Further, Cascade will move you to the Super King Bonus. Receiving one or more Cascades at this stage will take you to the Mega King Bonus. The Reel King Bonus has three levels of entry. Each has a different free spins trail and the lowest amount of Reel King symbols that appear during the bonus rounds. UK's players can play reel king megaways slot at Gentingbet.

If the three reels of a particular reel become lit, you will move one position towards the trail. A Reel King disappears if it spins to a losing combination and does not have at least three lit reels. Once there are no more kings left, the feature ends. The Free Spins bonus will be triggered once you get to a Free Spins line position.

Unless you reach the sixth reel, every red reel will remain lit across free spins. The Reel King symbol will show up across the reels when all six are red. The free spins numbers will increase in sequential order by one, two, or three while the present multiplier increases by zero, one, two, or three. The game recovers to the last known stage if unexpected interruption happens.

The Reel King Megaways is a classic slot game that uses the six reel Megaways game mechanics. The game was developed by one of the leading game developers in the gambling industry, Inspired Gaming. Reel King slots offers its players an amazing free spins and bonus rounds. And if during the game an unexpected interruption occurs, you will be able to recover the game. Try it out today.