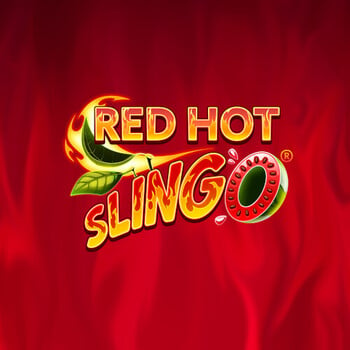 Produced by
Slingo
Red Hot Slingo is a mix of online slot gameplay and bingo. Although it isn’t the first of its kind, this spiced up version is the first to feature a full-sized 5x3 video slot grid. A product of Slingo Originals, the game includes a Slingo prize ladder where the top prize (the Full House) awards 500x your bet. The slot reels also offer a max payout of up to 500x, and the game comes with an impressive 96.33% RTP. Spicing up the action are special symbols like Wilds, Super Wilds, Scatters and Free Spins Bonus symbols. Ready to feel the heat?

The game screen depicts a 5-reel, 3-row setup and a 5x5 Slingo grid directly on top. The slot gaming aspect is more prominent here than in most Slingo variants. And besides the numbers, there are also fruit symbols ranging from watermelons to lemons, orange slices, plums and cherries. For some reason, the developer has included a blocker symbol that has no impact on the game, so you might as well pay no attention to those. The max win on the slot grid occurs when the reels are covered with the premium paying watermelon symbol, which awards 100x your stake for five across the reels.

Red Hot Slingo is slightly more complicated than your regular one-armed bandits, as it combines Bingo gameplay. As usual, you begin by placing your bet between 0.20 and 100. On starting the game, you get five spins, during which you have to match a grid number to one on the corresponding reel. There are 12 Slingo win lines, and the goal is to reach the top prize before a round ends.

There is the option to buy extra spins once you’ve exhausted your five spins. This is available for a price specified in the spin button. Also, additional play controls are available for setting the max bet, loss limits, maximum extra spin price, etc.

The gameplay may take a little getting used to, but the special features embedded in the Red Hot Slingo certainly don’t need any of that. Special symbols appear randomly to boost your chances of completing Slingo, and they come with attractive instant credits of their own. Whenever the wild symbol appears on a particular reel, it highlights the column on the Slingo grid directly above it. Players can mark any number on the highlighted column, thereby taking one step closer to completing Slingo. The wild also substitutes for all symbols on the reels, except the scatter.

Super Wilds are an upgrade to the regular wilds. These will highlight the entire Slingo grid from where you can mark any number you choose. The scatter symbol is given as a bell icon and pays for three or more landing on a spin. The final of the special features is a free spin icon that adds one extra spin to your gameplay. In other words, one more chance to hit a win line (Slingo) and move up the Slingo ladder.

Red Hot Slingo online is a well-thought-out game. This alternative gaming concept offers a bit more of a challenge than standard slots since you’ll have to decide which numbers to mark out and which Slingo to aim for. The top strategy here is always to go for numbers that complete one or more Slingos. Where not available, aim for the centre or the corners. With only five spins per round, paying for extra spins is your best shot at hitting the top reward, but keep in mind that those can get expensive. That said, the experience of playing the Red Hot Slingo game is undeniably massively entertaining.