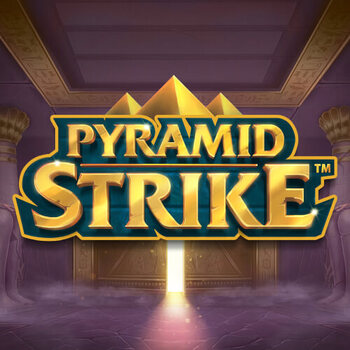 Enjoy a taste of ancient Egypt while playing the 20-payline, low to medium volatility, and 95.80% Return to Player rate with Pyramid Strike slot online. Enjoy a free spins round with multipliers and cash rewards by collecting bonus symbols. Before players are dropped into the base game's stone structure with brazier lighting, a visually appealing load screen sets the mood. Gods of Death, another dark Egyptian online slot from the studio, is one illustration of their expertise in this field. While filling the screen with more spooky visuals, Pyramid Strike manages to be just as atmospheric.

Players in Pyramid Strike use 20 paylines to strike winning combinations on a 5-reel, 3-row gaming grid. The normal betting ranges from 0.20 to 20, or double when the Super Stake option is used. Before you do that, give it some thought. While the basic game and free spins do result in more scatters appearing on the reels, the game's dynamics are also altered. For instance, the volatility rating ranges from 2/5 with Super Stake off to 4/5 with it on. However, Super Stake has no impact on the RTP, which varies depending on the market from 95.8% in the best case scenario to 88%.

A Bonus Wheel will then reward between 10 and 30 free spins with a multiplier of x2 or x3. To enter the Bonus Round, you must land at least three temple door scatters anywhere on the same spin. All bonus round winnings will be increased by the multiplier, but the Pyramid Strike Cash Prizes will remain unchanged. Retriggering the feature up to three times will give you the same number of spins as your first spins on the wheel.

Beat the heat and enjoy the Egyptian-themed game by signing up to Pyramid Strike at Genting Casino, which is accessible to any mobile device.