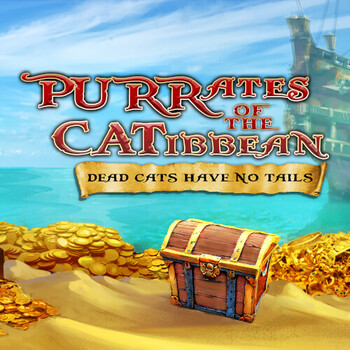 Set sail and set out on the seven seas. If luck is with you, you might find lots of treasures. Purrates of the Catibbean is a 5x3 slot. You can pick bets in a game from 50 to 100,000. It has a good Return to Player Rate of 96.4%. There are nine regular symbols in the game, including the Q, K and A, three pirate ships, and the three cats.

The main bonus is powered by the wilds. The wilds are the three pirate ships, one red, one blue, and one purple.

Look out for the three character wild symbols. They only appear on reel 5. When one appears on the fifth reel, the Lasting Loot Wilds Feature kicks in.

What's cool is that when the feature triggers, the pirate will leap across the reels, leaving a flag on the mast on the left-hand side of the reels. On this flag you can keep track of how many wild spins you have remaining.

The bonus is triggered by landing three treasure chests on reels 2, 3 and 4. You win 7 free spins to begin with, but the feature can be retriggered.

Register to Purrates of the Catibbean on Genting Casino to play. Available on all mobile devices. Take time to strategize on setting your limits and make sure you have proper breaks.