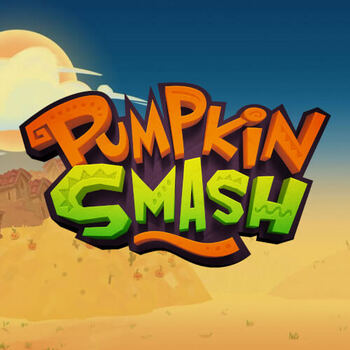 Pumpkin Smash slot online symbols are divided into two categories: low-value and high-value symbols. The four suits of the standard playing card deck, blue diamonds, green clubs, pink spades, and red hearts with gold lining and a skull at the top, all follow the game's theme and are listed as Low Pays in the paytable. The symbols are listed in ascending order, with the blue diamond being the lowest paying symbol, paying 4, 20, and 70 for combinations of 3, 4, and 5 matching symbols. The red heart is the highest paying of the Low Pays, paying out 8, 30, and 100 coins for landing combinations of 3, 4, and 5 matching symbols.

The Pumpkin Smash online slot is a scary game, but the two bonus game treats on offer will calm the dead and bring treats down from the heavens. If you land 2-5 Bonus symbols during base game spins, the Pumpkin Smash slot bonus game with the corresponding number of pumpkins will be activated (e.g. Two Bonus symbols will award two pumpkins). Prepare to smash the pumpkins to reveal 2-20 potential prizes, each of which includes 7-32 Free Spins, a 2x-7x single symbol multiplier, and 60-6000 coins.

The best site to play the Pumpkin Smash slot machine is at Genting Casino. Players can choose from a wide range of slots, table games, and live casino games. You can play from the comfort of your own home on any device with this website. Pumpkin Smash is a fun looking slot game with big payouts and frequent bonus features. Pumpkin Smash turned out to be a medium variance game with the potential for good wins in both the base game and the Free Spins feature.