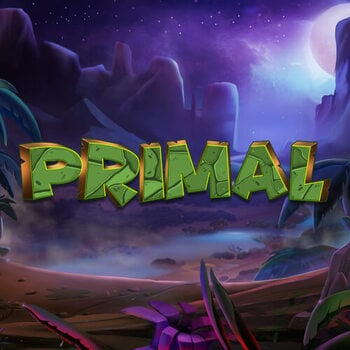 Produced by
Blue Print
Blueprint Gaming's Primal Megaways slot online is a prehistoric-themed game. The action takes place on a 6-reel machine with 46,656 Megaways to choose from. Mystery morphing symbols and a Free Spins feature are two of the game's standout features. These have wild multipliers that can add up to 7,776 times your stake. The number of active Megaways is determined by the number of symbols. You'll have 46,656 opportunities to win if all five reels feature the maximum number of symbols.

Start from reel 1 and land 3 or more matching symbols or wilds on adjacent reels to form a winning combination. There are no cascading reel wins in Primal Megaways online slot. If you get a win, you'll be taken to the next spin right away.

The stake levels here range from 0.20 to 10 every spin. Select a stake by clicking on the Bet bubble or adjusting using the up and down arrows. The paytable is simple to understand and shows sums as multiples of the whole stake.

The Primal Megaways Slot Game RTP is 96.76 percent, which is significantly higher than the industry average and one of the greatest among Megaways. The variance is also above average. The level of volatility is really high. The maximum payout is 50,000 times your total bet. The granite reels include a variety of prehistoric monsters such as rhinos and sabretooth tigers, as well as stone-style A to 10 values. The woolly mammoth is the greatest of these wild animals. If you get 2, 3, 4, 5, or 6 of these on adjacent reels, you'll win 0.5, 1, 5, 10, or 50 times your entire bet.

The game's mystery symbol is a roaring flame. All of them will activate the Mystery Symbols feature and turn into the same matched symbol if they appear on the same spin. Apart from the pawprint Wild or Scatter, this can be anything. When the transformation is complete, a new payout consideration is made. The mystery symbols can appear in the base game as well as the free spins.

The Primal Bonus feature is triggered when three or more skull scatter symbols appear anywhere on the reels during the same spin. After that, you'll play free spins with Wild multipliers, which will increase your chances of winning.

Aside from reel 1, the wild multipliers can appear everywhere. As their values are added up, I want to see more than one of them emerge in the same winning combination. A winner with a 2x, 3x, or 4x multiplier wild, for example, would receive a 24x payment boost. You'll get a 7,776x wild multiplier if a 6x wild multiplier appears on all 6 reels (6x6x6x6x6x6 = 7,776). There are no limits for retriggers.