Play Power of Gods: The Pantheon 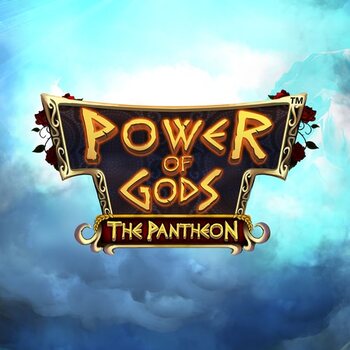 Power of Gods: The Pantheon is a Greek mythology inspired video slot that plays out on 5 reels, 3 rows and 20 fixed paylines. This slot has a bet range of 0.20 to 100.00 per spin, with an adjustable volatility and a 96.2% Return to Player rate. The reel is set inside a classical Greek structure, while animated figures Zeus and Aphrodite remain on either side of the reels.

The symbols showcase prominent gods and goddesses alongside classic slot symbols. There are 7 standard symbols in addition to the wild and the scatter which are also paying symbols in this slot. Zeus is the wild and has the highest value awarding up to 8,000x for 5 matching symbols across a pay line. Poseidon is the scatter and awards 2,000x for 5 matching symbols. He also triggers the free spins feature. Other mythology characters are Hades, Aphrodite, and Orpheus which are mid-paying symbols, while the classic royals A, K, Q, and J symbols are the low pays. Bonuses may be awarded upon collecting lightning coins and roses which only appear during normal play. Lightning coins feed the Zeus meter while the roses feed the Aphrodite bonus meter. Five icons are needed to fill each meter and an extra one is needed to activate each bonus. Zeus hurls his lightning bolts to throw in wilds during the free spins to increase your winnings. Aphrodite bonus awards 5 free spins during which she makes 8 random symbols vanish.  Symbols above drop to form new combinations. The cascading reel action continues until the symbols occupying the empty spaces do not result in a win. Trigger the kraken feature by matching 3 or more scatters across the reels to unlock up to 20 free spins. During the kraken free spins mode, Poseidon thrusts his body against the reels causing them to move one position to the right until there are no further wins.

Mingle with the gods in this video slot by registering to Power of Gods: The Pantheon on Genting Casino, available on mobile devices and tablets. Only spend what you can afford to lose. Gamble responsibly.