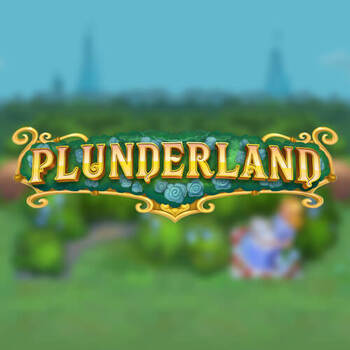 Go where imaginations run wild in this fantasy-inspired game that borrows the zany characters of  Alice’s Adventures in Wonderland. Plunderland is played in a 7x7 grid using cluster pays to crank out winners. Form winning combinations when at least 5 identical symbols land adjacent to each other in horizontal or vertical directions. Clusters are then removed to make space for new symbols to drop down.

There are six pay symbols with Alice, the Mad Hatter and Queens as the high values, and the other three are low-value flowers. The most valuable clusters include 32+ symbols and are worth 150-500x for the highs and 70x the bet for the low pays. The White Rabbit is the wild and replaces all regular symbols when evaluating cluster wins. The wild is present on every spin and moves one step closer to the hot spot after cluster wins. The hot spot is the centre cell of the grid. When the White Rabbit wild reaches it, he expands in size. The first expansion is 2x2, then 3x3, followed by 4x4, then finally 5x5. If the expanded wild is used in a win, it gets removed from the reels as part of the cascade and appears again in 1x1 size in a random position.  If he reaches the hotspot, he expands to the next size up. The wild has a win multiplier which increases by +1 every time it is used in a cluster win. The Mad Hatter throws a tea party when 3 scatter symbols are collected throughout a game round, and 6 free spins are awarded. After an expanded wild is used in a win, it cascades off and reappears in a random position. The next time it reaches a hotspot during the bonus game, it grows to the previous size, rather than start from 2x2 again. Players have the option to buy 3 scatters to appear on the next spin  for 70x the bet.

Set your spend limit and register to Plunderland on Genting Casino, playable on all devices. Only gamble money you can afford to lose and keep gambling fun.