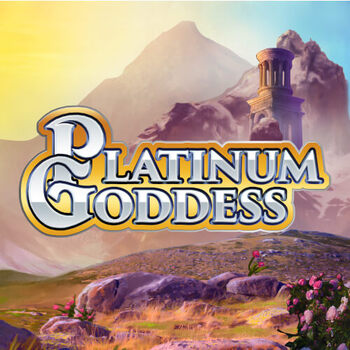 Will you be able to earn the favor of the Goddess and get lots of rewards? Platinum Goddess is a 5x3 reel with 50 paylines. Betting starts from 0.4 up to 80 per spin. It has a good Return to Player Rate of 96%. Symbol designs are a mix of playing card royals and characters tied to ancient Greece. We see a white dove, Pegasus, a handsome man and the goddess Athena. They play the role of higher value icons. The Platinum Goddess logo is the Wild, while a beautiful red rose is the Scatter. The Wild is also the highest paying symbol.

The Super stacks bonus is active at all times. However, it plays differently during normal gameplay and during free spins. During normal gameplay, the affected reels can transform into any icon. It can contain playing card royals, the goddess, the man, Pegasus, the dove and even the Scatter and Wild! As the name implies, the chosen symbol will appear super stacked on one or more reels. This increases the odds of forming a win using that icon.

Free spins are activated by landing three Scatters on reels two, three and four. This grants seven extra turns. It is not possible to win additional free spins while the bonus is already active. Once the counter reaches zero, the free spins end.

At the start of the free spins round, choose a Scatter to reveal the goddess, the man, Pegasus or the dove. The reels affected by the super stacks bonus will grant stacks of the revealed symbol. This happens at the start of every free spin! There is an obvious trade-off here. On one hand, we get guaranteed high value icons appearing stacked on the reels. On the other, we cannot get stacked Wilds or Scatters using this bonus.

Set your gaming budget and register to Platinum Goddess on Genting Casino, playable on all mobile devices. Just make sure that you don’t play any more than you should in your quest to unlock rewards.