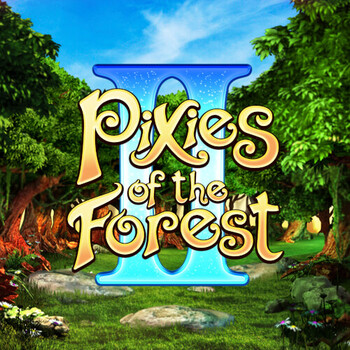 Produced by
IGT
Take a journey through the magical forest with Pixies of the Forest II slots, in this casino slot classic. Packed with tumbling reels, win multipliers, mystery features and Pixie Queen surprises in the free spins, the progressive jackpot slot has the potential to provide life-changing wins. The main feature is the introduction of the Spirit Meter, a build and spend mechanic, which enables you to collect Spirits on each winning tumble and spend the winning Spirits on feature wild tumbles. This five-reel, three-row Pixies of the Forest II slots online has 99 fixed paylines and comprises all your favourite characters, plus the addition of the Pixie Queen, a new character to the line-up. She is the star of the bonus round, where she grants the players special gifts that offer greater win potential.

The set of pay symbols has remained unchanged with the card royals J, Q, K, and A at the low end and the blond, brunette, and purple-haired pixies at the medium level. Top symbol is still the slot logo. Wins for a single five-of-a-kind, range from three-times to 30-times your bet. The Pixie Queen is the bonus symbol, while a small pixie marked with the word 'Jackpot' will trigger the jackpot bonus game when three land on the back reels.This spellbinding slot incorporates Tumbling Reels, where symbols from a winning combination will magically disappear and the remaining ones tumble down to make space for new symbols to drop in place.

The Spirit Meter will increase by one for each consecutive winning tumble within a single spin sequence, up to a maximum of five. You can also trigger the Feature Wild spins with three different wild patterns: Wild Reels, Random Wilds and Countdown Sticky Wilds. At the start of a Feature Wild spin, the added wilds can turn into bonus symbols to trigger the Pixie Queen's Free Spins round or the Jackpot bonus game. Play Pixies of the Forest II slots online and the Pixie Queen will randomly grant extra gifts after any free spin to enhance the reels or extend the feature.

The Progressive Jackpot is triggered when jackpot symbols land on reels three, four, and five, or via the mystery bonus in the base game. A second screen appears, displaying the three jackpots and a choice of 16 pixies. You pick the pixies to fill the four orbs of the jackpot meters to win the attributed jackpot.

You can now play Pixies of the Forest II slots whenever and wherever you like, as this enchanting journey in the forest is available on desktop, tablet and mobile devices. Give it a try, as it could pan out to be your lucky day!