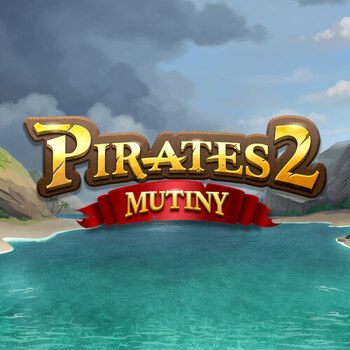 Produced by
Yggdrasil
Play Pirates 2: Mutiny is an online video slot from Yggdrasil that was released onto the iGaming market in 2020. To play Pirates 2: Mutiny Slot, players have to wager a minimum of £0.20 up to £100 per spin. The slot also comes with a coin value and bet level field that can be adjusted and used to specify preferred bet size. The layout of the game features a 5x5 grid, and it uses a cluster pay system rather than paylines. Like most video slots from Yggdrasil, Pirates 2: Mutiny Slot features both low-paying and high-paying symbols. The low-paying symbols are the classic card suits - hearts, diamonds, clubs and spades. As for the high-paying symbols, the developer used icons such as a purple captain, green swab and a red lady. Players can play Pirates 2: Mutiny Slot online on their desktop computers, tablets and smartphones. As the title of the slot indicates, it has a Pirates theme. The main playing grid of the game is set on a wrecked ship in a deserted island, and it is visually appealing with an awesome soundtrack playing in the background. Players that play Pirates 2: Mutiny Slot online can expect a maximum win of 4,400x their initial stake in the game. Pirates 2: Mutiny Dropdown Wins Feature Yggdrasil has added several bonuses features to Pirates 2: Mutiny slot. There is a Dropdown Wins Feature that is triggered when a cluster of 6+ symbols appear on the reels. When this happens, all non-winning symbols are removed and the cluster of symbols dropdown to the bottom of the reels. Any winning made during this mode can lead to increased winnings of up to 25x. Another impressive bonus feature in the game is the Free Spins Feature. This can be triggered in the base game and the Dropdown Win mode when 3 or more scatter symbols appear on the reels of the game, rewarding players with 7 free spins. During the free spins mode, a high-paying symbol will replace all other high-paying symbols, and winnings are also multiplied by up to 25x. A special bonus feature included in the slot is the quick modifiers. There are three quick modifiers - Mutiny, Tsunami, and Cannon Blast. As for the Mutiny modifier, a 3x3 symbol can appear on the reels to reveal 9 common symbols. The Tsunami modifier is triggered during a losing spin with 6 potential winning combinations in view. It helps players land a win by removing all non-winning symbols.

• Scatter Symbol: A key adorned with a skull

Yggdrasil has set the game to offer players a 96.20% RTP. As for volatility, the slot is classified as a medium volatility game. The inclusion of customisation features, as well as the Max, Bet and Autoplay option also gives players the opportunity to personalise their experience playing the slot. Why not try out Pirates 2: Mutiny slot for real money to enjoy all its amazing features.