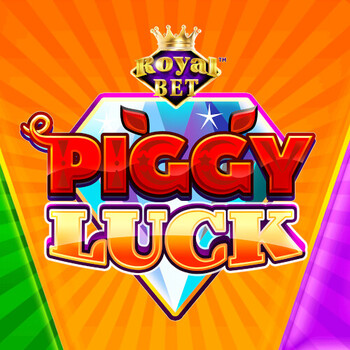 Produced by
MicroGaming
GONG Gaming's low volatility, mobile-friendly Piggy Luck game features 20 paylines across 5x3 reels. Wheels above the grid indicate the three primary bonus features, and you may either wager to win them or naturally trigger them. You can earn a maximum of 10,000 times your wager with the reward ladder function, and the bonus round can be retriggered indefinitely. Piggy Luck has a return to players rate of 94.13 percent and low volatility. Play Piggy Luck for as little as 0.25 and all the way up to 50 per spin.

Gong Gaming creates slots with innovative mathematical reasoning wrapped in premium artwork and cutting-edge gaming technology. Despite the fact that a new supplier already has a sizable number of slots in its lineup.

The basic 5x3 grid and 20 paylines are back with the Piggy Luck slot game. You receive a prize in accordance with the payouts of the symbols when you land three to five identical symbols on adjacent reels from the left side of the panel.

There is a lot to discuss in terms of bonus features, as you can activate Cash Collect, Golden Path, free spins, and more. You may win prizes worth up to 10,000 times your initial investment with any of them.

The animal theme makes us think of slots with financial themes, just like many slots with pig themes do. At first glance, the plain blue background, which contains only a few items, appears reasonable and appealing.

Its appearance isn't very modern because the symbols on the reels are simple and straightforward, and the graphics' layout is reminiscent of earlier online slots.

The low-paying card rankings Q, K, and A are located on the lower portion of the paytable, while the high-paying symbols are crowns, stars, and diamonds. The value of the first symbols ranges from 5x to 12.5x the wager, whereas the later are worth 7.5x to 12.5x.

Wilds in Piggy Luck slot online are worth up to 50x the stake if 5 of them land on a line. Also, they have the role of replacing regular pay symbols in winning combinations. The highest possible Piggy Luck RTP can be 95.12 percent. Piggy Luck is available to play on any device and has bet choices of 0.20 to 25 per spin.

Piggy Luck online slot has amazing features that can land wins. The Golden Path feature is activated when three Piggy King icons land on reels 2, 3, and 4. There is also a 6-segment wheel with the numbers 1-6 on each segment, along with a ladder of prizes. The prize ladder's progression is shown by the player's position on the spinning wheel. The lowest number on the wheel goes to Collect after each spin. When the arrow on the ladder lands on Collect, the feature is over. The prize amount is determined by where participants are on the ladder.

To activate the Cash Collect feature, land three Piggy Joker symbols on reels 1, 2, and 3. The screen in this instance has 20 coins on it. To expose the multipliers of the bet, players select them one at a time. When a picked coin exposes a cash value and a tick, the feature is over. The total of all multipliers is then given.

Three wheels, one for each feature—free spins, cash collect, and golden path—are located on top of the grid in the base game. There are two segments on each wheel: a trigger area and a non-feature section. The Joker, King, and Piggy Queen symbols that players collect expand each trigger region on the wheel. Each wheel can be spun for 10 times the bet, and the feature will start if the wheel arrow lands in the trigger area.

The Piggy Luck slot machine has a straightforward design, but the activation of its potential features can increase its amusement value. With favourable symbol payouts, wilds, and high win potential in addition to low volatility, prizes may be awarded more frequently, despite not being of high value. Piggy Luck is fun to play and offers prizes, so give it a shot. Play Piggy Luck slot and win.