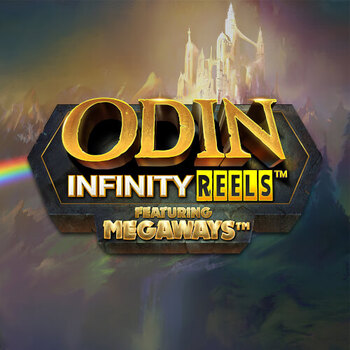 Produced by
Yggdrasil
Odin Infinity Reels slot is a video slot that is based on the fictional character, Odin Borson, former King of Asgard. This historical Norse mythology-themed video slot guarantees players with various in-game features such as the jackpot multiplier and free spins, among special symbols such as the scatter and wild symbols giving players a chance to maximize their winning luck. Step into the world of Norse mythology in Odin Infinity Reels

It's possible to play Odin Infinity Reels through either a tablet, mobile phone or desktop thanks to the game designers making it possible for the video slot supported across devices with Android, iOS or Windows operating systems. The graphics are unique and detailed and a good soundtrack accompanies them. The game quality remains no matter which platform it's played on.

Players can enjoy playing Odin Infinity Reels slot online on various browsers too, adding to the complete accessibility of the game. The game layout comes with 3 reels, which expand after every win and 2 to 5 rows. The pay lines are also infinite and the Norse mythology-theme blends well with the symbols on the reels among them Odin, horses, birds and wolves.

Gamblers can also play Odin Infinity Reels slot with a minimum or maximum wager limit of 0.30 or 12 Coins respectively per spin. Also, the Return To Player (RTP) rate stands at 96.18% which is good for players although this video slot is highly volatile meaning, going for the high rewards might require patience from players, but some small wins will definitely motivate them.

The free spins feature has different levels which start from 1 to 4. Each level has a symbol multiplier that increases across each level by one. To unlock them, players require landing a scatter symbol that will reward them with two spin options- One to determine their level of free spins and the other to determine the number of free spins.

Odin Infinity also features a Jackpot Multiplier feature capable of rewarding the player with 888x their placed bet although, winning it is a challenge because the player will need to expand their reels to 12 or more in a single spin sequence which could set them back to over 60, 000 spins. Players ought to know that it will not add this impressive multiplier to the symbol wins.

In Odin Infinity video slot, anytime the player forms a winning combination, it adds an extra reel after which the Symbol Multiplier feature activates to reward players with an unlimited number of multipliers which increases by, 1x any time the player adds a new reel. Players of Odin Infinity will find this feature in the base game and in the free spins feature.

It's safe to say that for players who enjoy a wonderful game with excellent graphics backed up with a decent soundtrack, Odin Infinity will definitely interest them. The game clearly comes with a good package to entertain its players and players can find it at Genting Casino Casino although, being a highly volatile slot, it will require players to exercise extreme caution while going for the huge rewards.