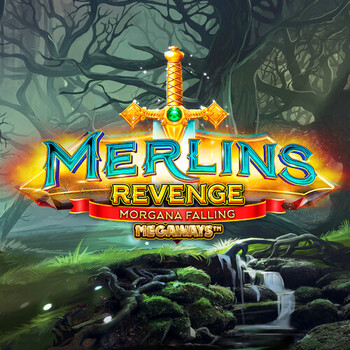 Merlins Revenge Megaways slot's overall design is incredibly immersive and meticulously detailed. The graphics are outstanding, emphasising the fantasy elements as well as the bright symbols. The reels have iron accents and are set against a stunning backdrop. It features a dark, enchanted forest with plenty of dead trees, as well as fantastic animations. On the left, you can see a small house, but on the right, you can see a small stream and the Excalibur. In the background, there is an epic orchestral soundtrack that can set the game's adventurous tone.

The low-paying 9, 10, J, Q, K, and A symbols, which are all different colours, appear in the first half of the paytable. A blue gem, a green gem, and a purple orb, in ascending order, are the high-paying symbols in Merlins Revenge Megaways slot online, with Merlin himself being the highest-paying symbol, worth 10x the stake for a fully covered payline. The mystery symbol in the game is a scaly green orb, and the scatter symbol, Excalibur, can award free spins. Finally, the wild symbol can be used to form winning combinations by substituting for the regular pay symbols.

Cascading Wins, Random Modifiers, Free Spins, and Symbol Collect are among the features. The Cascading Wins feature activates when you get a win on the reels. The winning symbols are replaced with new symbols. This gives you another chance to win. As long as new wins are created, the cascades will continue.

In the base game of Merlin's Revenge Megaways, there are two randomly triggered bonus features. The Merlin's Magic feature transforms a losing spin into a winning one, or you can activate the free spins. The maximum Megaways feature allows you to play with the most Megaways possible (117,649 ways to win).

Three or more Sword Scatters will award you between eight and twenty free spins, with the option to increase the number of free spins by spinning the wheel. Symbol Collect is active during Free Spins, progressing from low to high symbols. Extra spins are awarded and the minimum number of Megaways is increased every time the required number of symbols are collected.