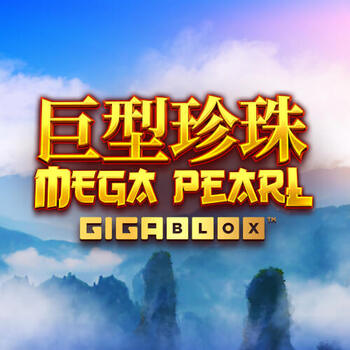 Produced by
Yggdrasil
Get ready to see pearls, and lots of them, as you spin the reels of ReelPlay’s Megapearl Gigablox online slot game! Heavily steeped in Asian culture, the game features dragons, pearls, and lots of riches just waiting to be found (or won). This 6 reel slot game was built around ReelPlay’s Gigablox mechanic and you can find Gigablox symbols land on every spin as you land pearls and even trigger bonus features along the way! Get a chance to win up to 225,165 as you play Megapearl Gigablox! Learn more about it in our review!

ReelPlay’s Megapearl Gigablox slot game is an Asian inspired slot game played on 6 reels and 4 rows with 40 fixed paylines. Playable with a bet ranging from 0.20 to 14 per spin, this is a low volatility slot game with an RTP of 94%. The game features dynamically oversized symbols which may appear on every spin, bringing chances of huge payouts.

The Asian inspiration of the Megapearl Gigablox slot machine does not stop at the game’s backdrop and reel design, but it also extends to the game’s symbols. The lower paying symbols are represented by four Chinese characters which can award you with payouts worth 1.25x your stake for xis matching symbols. The high-paying symbols are represented by a lotus flower, lanterns, coins, and sycees. These pay 2.5x to 5x your bet for six on a payline. The Dragon symbol is both the Wild and the highest-paying symbol in the game at 7.5x your stake for six-of-a-kind. As the Wild, it can stand in for any symbol to help create winning combinations. The Pearl symbols is the Scatter.

The Gigablox feature of the Megapearl Gigablox game is easily the most notable feature. Along with this feature, ReelPlay has put in a respins bonus game as well as a buy bonus feature.

This feature is active on every spin. Oversized symbols may appear on the reels in 2x2 to 4x4 formation. Any symbol in the game including the Dragon symbol as well as the Pearl Scatter may appear in Gigablox form. Every spin in the base game will have at least one Gigablox reel.

Triggered when 6 or more Pearls appear on the reels. You get 3 repsins and each Pearl may contain a multiplier ranging from x1 to x1000. If a Pearl symbol appears sized 2x2 or bigger, it turns into a Megapearl. The value of the Megapearl is twice the sum of the multiplier values of all combined symbols. Megapearls sized 2x2 and 3x3 may be combined with other Pearls and Megapearls to create even bigger Megapearls. All Pearls and Megapearls are held in place as all positions respin. Land more Pearls to reset the respins back to 3.

You can buy the Respins bonus feature of the Megapearl Gigablox slot online with a value worth 3200x the base bet. The Buy Bonus game is played at x40 the base bet.