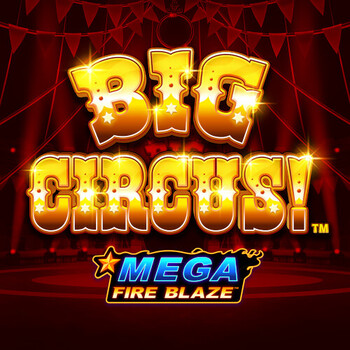 The circus is in town and it's waiting for the audience of players to arrive. Rarestone Gaming and Playtech join forces to make one of the most exciting entries in the online slot market. Mega Fire Blaze Big Circus puts you with the strongman and his team to earn great rewards of up to 2,238x the stake. The slot series counts no less than 17 games with Mega Fire Blaze Big Circus as the new expansion. Following the footsteps of Legacy of the Tiger and Khonshu God of Moon. The slot utilizes a beefed-up Mega Fire Blaze Respins feature with a range of jackpots to offer.

Mega Fire Blaze Big Circus slot utilizes a common circus theme with the reels set under the big top. Bright lights, circus cannons, and numerous performers. Everything in the slot game captures the essential circus vibe and evokes images of one's childhood with a magic show. The soundtrack also captures the ambient sounds of a circus tent and graphics as well. Rarestone Gaming manages to convey the circus atmosphere and its Big Circus slot immerses you into the game. The music also picks up on interactive cues for a more engaging appearance. The actions take place across a 5x3 reel producing 30 ways to play each spin. Volatility is in the medium range, while the RTP is well above the average at 96.37% which can go to a 95.42% depending on where you play. Land 3 to 5 matching symbols adjacently to score a win.

Features such as the Respins feature can be triggered with 6 or more Target and Cannon symbols. Additional roles and features from the Clown, Trapeze Woman, and the Strongman are in tow for more surprises. Ready to take part in the greatest show in the world?