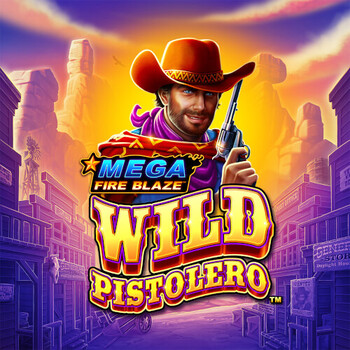 Transport back to the old wild wild west for an intense cowboy adventure. Mega Fire Blaze Wild Pistolero is a 5x3 reel slot with 30 betways. Stake ranges from 0.10 up to 500. It has a considerable Return to Player Rate of 95.96%.

Symbols in the lower section comprises classic A-10 royal symbols, worth 1.6x the stake for 5-of-a-kind wins. Premium symbols include horses, bankers, women, and cowboys, which rewards 2.5x to 6x your bet when 5 instances appear on a win line. The game's logo is Wild, and it appears on reels 2 - 5 to substitute for any other regular symbols.

Respins feature is triggered when 6 or more Gun Cylinder, 1 Bullet, or 2 Bullet symbols appear anywhere on the reels simultaneously during the base game. Each Gun Cylinder symbol reveals either a bet Multiplier of 1x, 2x, 3x, 4x, 5x, 10x, 15x, or 50x, or a Star icon, which, in turn, transforms into either Mini, Minor, or Major Jackpot prize at the end of the feature, and those are worth 20x, 100x, and 500x the stake respectively. Bullet symbols also transform into Gun Cylinder symbols upon landing, with a prize value of 1x the bet.

Cowboy - doubles the value of up to 10 random symbols in view.

Woman - awards a random Multiplier that will be applied to all symbols on the corresponding row at the end of the feature.

Banker - awards a spin on the Bonus Wheel.

Respins feature ends when players run out of respins or when the entire grid is filled with bonus symbols and the Grand wheel feature is played.

A Free Spins feature is  triggered whenever 3 or more Saloon Scatter symbols land in any position on any base game spin.

Register to Mega Fire Blaze Wild Pistolero on Genting Casino to play. Available on all mobile devices. Remember not to spend everything in one go, a little restraint on your budget would not hurt.