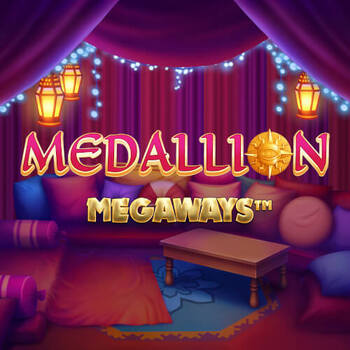 Following the blueprint of past Megaways slots, small-scaled studio upstart Fantasma Games is back with their next offering. Coming from past work, Flower Fortune Megaways was so unique. A mix of Nintendo-like visuals, soothing music, and Candy Crush elements. Fantasma's debut Megaways offering went on to become a hit and was well-received by both recreational players and the casino community alike. Medallion Megaways is a 6x6 grid video slot with cascading reels that can produce a random number of wins from between 64 to 46,656. The medium variance can be a fair amount for low to high-risk. Return to Player value is at a 96.23%, a risky but rewarding slot.

Medallion Megaways has astounding visuals. Set in a luxury tent in the Saharan desert, Fantasma has managed to forge quite an atmospheric setting with plenty of coziness and warmth. The airy ambiance is only the first of many until you trigger the bonus! Medallion Megaways is made of an assortment of gemstones with high-value ones that are marked with triangles, crescent moons, and stars. But the most rewarding of them is the one carrying the golden snake which gives 30 times the stake for six on a payline. Crystals serve as wilds and appear on certain reels.

As with most Megaways slots, Medallion Megaways is played using Cascading Reels which means that winning symbols are replaced with new ones, allowing you to win repeatedly from a single spin. Win Multipliers increase by 1x with each successive cascade and reset back to zero on a non-winning spin. Mysterious medallions such as the Expanding Wilds where all crystal wilds expand to fully cover the reels. Another is the Void Respin, landing these remove symbols that are not part of a winning combination. Sahara nights have rewards in store. Play now.