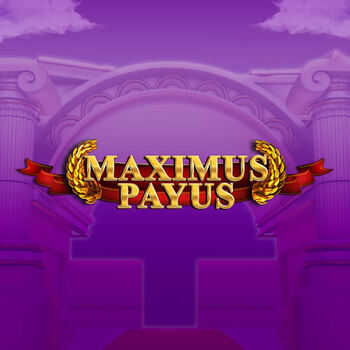 Produced by
Inspired
The Maximum Payus slot online has five reels and 1024 different win lines. The RTP for Maximus Payus online slot is 95% which is slightly below market average. It is playable between 0.20 to 90 which can be good for both penny slot fans and high-rollers. The maximum possible win is capped at 250,000. This is a high volatility slot which may mean stretches of non-winning spins and larger chance at high value wins compared to lower volatility games.

The Maximus Payus game graphics have a unique style that makes the slot stand out; it feels like an animated film set in the perilous world of Roman gladiators. The symbols really work to convey an authentic ancient Roman vibe. Symbols such as the Coliseum, a chariot, a legionary, swords, and a helmet add to the game's immersion. Other symbols include the classic card symbols found in many slot games, such as an ace, king, queen, jack, ten, and nine. Maximus Payus will undoubtedly be the champion of the players; he can launch into battle with a Free Spins bonus game in which players can win up to twenty free spins, or he can use the Fortune move to increase the bet by 50% for a chance at bigger wins. Other game bonuses include Wild Cards, Expanding Symbols, and Substitution Symbols. The big wins come from stacked Maximus symbols in the base game, random reel bonus, or even better, free spins with multiplier Wilds.

The gold wreath symbol is the Wild Card for this slot. It can be used to replace any symbol and increase the chances of a winning combination.

The Scatter symbol is the eagle, which causes the reels to spin faster and increases the likelihood of a win. A bonus game will be triggered if three or more of these scatter symbols appear. Players can get Free Spins bonuses and Fortune Bet bonus features here.

The Maximus Payus slot machine has four additional bonus games. We won't reveal them here, but they help to make this game extremely rewarding for players.

What is the maximum bet for Maximus Payus?

The maximum bet for Maximus Payus is 90.

What is the minimum bet for Maximus Payus?

The minimum bet for Maximus Payus is 0.20.

Can I play Maximus Payus on mobile?

Yes, you can play Maximus Payus on any Android or iOS device.

What is the RTP of Maximus Payus?

What is the biggest potential win for Maximus Payus?

The biggest potential win for Maximus Payus is capped at 250,000.