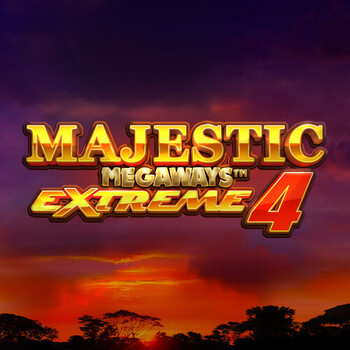 Produced by
iSoftBet
The iSoftBet slot Majestic Megaways Extreme 4 game features 4 reel sets with up to 117,649 win lines each set, making it a risky follow-up to the company's popular African safari game. There are two distinct bonus rounds, cascading wins, mysterious symbols, and random Max Megaways spins for your benefit. The extreme version has a limitless progressive win multiplier in both and 3 unlockable reel settings. The game's maximum victory is 20,000 times the stake. Play Majestic Megaways Extreme 4 for 0.50 to 50 per spin.

Animal themes are one of the themes most frequently used in slots, and they are included in the Majestic Megaways Extreme 4 slot game. An African savannah may be seen in the backdrop, along with some flying birds and an orange sky. Because the sun has set, nature is completely dark.

There are African animals and card royals visible on the reel sets, but other than the golden frames, not much distinguishes their style. The music is very African, and the animations provide a lovely touch to the whole aesthetic.

The 9-A card royals are listed as low paying symbols on the paytable and are valued between 0.08 and 1.75 times the stake. The high-paying water buffalo, rhino, elephant, and lion symbols are each worth 2 to 50 times the stake.

The wild symbol in the game only appears on the horizontal reels of each grid and can be used to create winning combos in place of the pay symbols.

As for Majestic Megaways Extreme 4 slot online, its RTP is set at 96.0 percent, which is the industry average. High volatility may result in more significant and sparsely spaced prizes.

There is an additional horizontal reel that spins above each of the grids in addition to the six reels and six rows that make up each reel set. You can create winning combos on any of the 470,596 paylines by landing three to six matching symbols on them in a row from left to right.

When it comes to features, Majestic Megaways Extreme 4 online slot offers the cascades feature following each win, as well as the option to use mystery symbols or free spins to activate the main bonus. The highest wins possible are up to 50000x the bet.

The sunset Wild substitutes for pay symbols to assist complete winnings, and the premium symbols pay between 2 and 50 times your stake for 6 of a kind wins. Additionally, full moon Mystery Symbols can appear on any reel and at any stage, and each occurrence of these symbols transforms into the same randomly selected complementary pay symbol.

The Max Megaways feature, which awards you a spin with a fully loaded grid, can occur at any time throughout any stage. This indicates that there are 117,649 ways to win, which might result in quite substantial prizes if you're lucky. As long as you keep winning, cascading winnings will take away winning symbols and grant you endless further wins per spin.

One grid is used for the regular Free Spins feature, which has a 1 in 121 hit rate. When three or four scatter symbols appear together in a cascading pattern, you will receive an additional five or ten spins. Starting at x1, a progressive win multiplier is implemented. It has no upper limit and increases by +1 for each cascading victory.

Majestic Megaways Extreme 4 slot machine is a solid game. The game stands out from the competition and offers up to 470,596 potential winning combinations. It's uncommon to witness a Megaways win that is actually substantial and straightforward, although the Max Megaways function might be helpful in that sense. Play Majestic Megaways 4 slot and win.