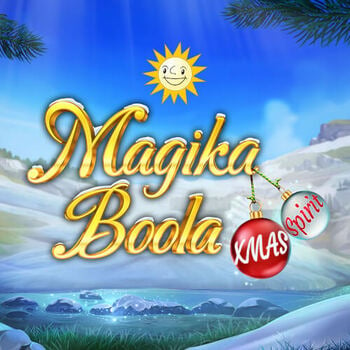 The Magika Boola Xmas Spirit online slot was created by Edict, popularly known as EGB. The price to play the game can range from 0.10 to 100 per spin. Additionally, it has a 4/5 volatility rating and a return to players rate of 96 percent.

Three of the closed doors start to open at the beginning. Always open are at least three doors. The Christmas witch could show up at any time at the closed doors. She opens them, and after the current spin and one re-spin, they remain open. When the Christmas witch works her magic, some of the open doors will close. All the doors then close once more, with the exception of those that were open when the witch arrived.

Three keys are required to unlock the doors in the sixth column and fourth row. Only the reels 1, 3, and 5 of the base game feature them. Additionally, the symbol that starts the 10 free games is the key.

The reel combination 6x4 and the three keys that were previously gathered in the main game are used to launch the free games. The magic quill will record the number of keys collected in the book. The charmed Gingerbread Man then appears, joining the other unseen guests. Each of these bonus scatter symbols gives you a key extra. The free games allow you to gather up to 9 keys.

Finally, you go back to the Christmas witch in the first game. The doors there are affected by the keys that players have gathered from playing free games. For instance, if nine keys are obtained, six doors are unlocked, and they remain open until a new free gaming session begins or the Christmas witch reappears.

Magika Boola Xmas Spirit slot machine has amazing bonus features. The doors in the fourth row and sixth column can be opened with three keys. They only appear on the first, third, and fifth reels of the base game. The symbol that initiates the 10 free games is also the key.

The free games are started using the reel combination 6x4 and the three keys that were previously obtained in the main game. The amount of keys gathered in the book will be noted by the magic quill. The charming Gingerbread Man then joins the other invisible visitors. You receive a key bonus for each of these bonus scatter symbols. You can gather up to 9 keys in the free games.

You then return to the Christmas witch from the initial game. The keys that players have acquired from playing free games have an impact on the doors there. Six doors, for instance, are unlocked if nine keys are acquired, and they remain available until a new free gaming session starts or the Christmas witch reappears.

Magika Boola Xmas Spirit is an awesome game. The visuals are dreamy and will give you that holiday vibe. The soundtrack is also engaging and will keep the players entertained. The 6x4 reel is beneficial as you go through the bonus rounds. The keys are not that easy to trigger but when you do, the bonus round is worth every penny. This game can also give you tons of cash if you are lucky. Play Magika Boola Xmas Spirit and win big.