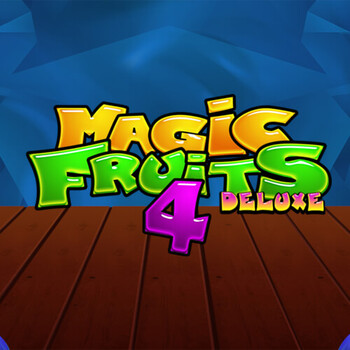 "Traditional games never go out of style" is the story for studio Wazdan's online slot game. There is always value in a good old Vegas-inspired slot machine. Wazdan's devotion to the genre brings another old-school slot in Magic Fruits 4 Deluxe. Although a newer game studio launched in 2010, Wazdan has earned its share of traditional slot fans that replicate the charm of old fruit machines. Magic Fruits 4 Deluxe emits an overall feel-good vibe as a game. It's a beautiful orchard full of forbidden fruits on the reels. An unforgettable world of classic casino gameplay is finely executed for players alike.

Offering 4 reels, 10 paylines, and various features, Magic Fruits 4 Deluxe has its reels filled with the images of mouth-watering fruits and standard slot symbols. Equipped with vivid graphics and smooth animations. The slot game features classic fruit symbols like 7s, bells, and grapes. Sporting an animated fruity background, an upbeat soundtrack, and simplicity like no other. Magic Fruits 4 Deluxe was built for experienced players and modern slot fans looking for something to enjoy. To make things even more interesting, the game leaves the players the chance to choose the level of variance. As well as an option to take a gamble on every win made. The RTP stays at a standard 96.1%.

Magic Fruits 4 Deluxe also has additional features including special Joker symbols and the Risk mode. Flying out big risk has never been better with the slot game letting players choose the level of volatility while playing. The paytable is quite simple and features two groups of winning symbols as well as 1 Joker symbol which serves as extra. Collecting 3 or 4 Joker symbols on an active payline. will get players excited. Giving out simple gameplay and solid jackpots. Play now.