Play Lets get ready to rumble 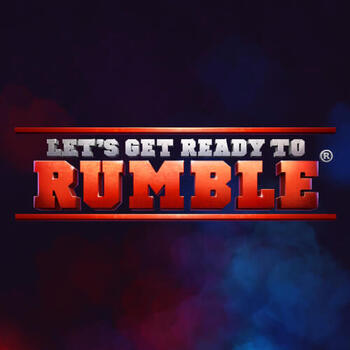 Let’s Get Ready to Rumble on the slot and win amazing rewards. This game is a 6 reel, 466 ways to win game that comes with plenty of extras. They include 4 base game modifiers as well as stacked wild reels and streak respins. Betting starts from 0.10 up to 100. It has a Return to Player Rate of 96.14%. The reels are filled with fight-related symbols. You’ll see red, yellow and blue tape alongside a microphone, a bell, a glove, a belt, a ref and 2 fighters. MC Michael Buffer is the best symbol, awarding 1, 2, 3 or 4 times your stake if you land 3, 4, 5 or 6 in combination. There’s also a wild.

On any spin you could be awarded a Rumble Spin which delivers 1 (or perhaps more) of the following modifier extras:

The Sticky Spin feature can trigger at random following a winning spin. The successful symbols are held and the reels spin again. The streak respins continue until there’s one where no new matching symbol or wild hits and joins the original cluster.

Also triggering at random is the Wild Stacks feature. Between 2 and 5 reels can turn totally wild when this mini feature activates.

Sign up for Let’s Get Ready to Rumble at Genting Casino, which is accessible on any mobile device. Remember not to spend everything in one go, a little restraint on your budget would not hurt.