Play Legends of Troy: The Siege 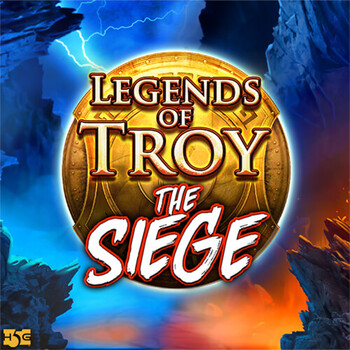 One of the most fascinating stories in Greek mythology has taken life and comes as a new online slot game. The Siege of Troy was a monumental moment in the Trojan War where the Greeks devised the ruse of the Trojan Horse. Now, High 5 Games brings Legends of Troy: The Siege. An online slot developed with an unusual grid layout. Featuring merging symbols, multipliers, and free spins. The game is highly volatile coming with a Return to Player value of a standard 96.00%. Populated by 36 symbols divided into nine grids. A possibility of winning a total of up to 500,000x the stake is at hand.

The adventure-themed free slot game can be played on any device. Highly compatible for mobile, tablet, desktop, and laptop. It comes with nine 2x2 grids fused into one block. The reels sit in the middle of a battlefield complete with an advancing army that moves forward or backward after every spin. A desolate place with fire and smoke and a lightning-streaked sky. Players will see the cliffs as the reels spin to a soundtrack that completes the overall playing experience. Soldiers come out of the grid as players spin. Symbols such as the dagger serve as the highest prize. DIshing out up to 5,000x the stake when filling the grid with 9 fused symbols. Followed by the helmet, the horn, and the shield. Low pays are the standard royal cards. The bonus symbol appears as a treasure chest.

Legends of Troy: The Siege also has bonus features hidden inside the Trojan Horse. Each of the mini-reels can become charged. This is filled in increments depending on the criteria. Free spins are triggered by having a minimum of three mini-reels full of purple bonus symbols. Take the golden spoils! Play now with Genting Casino.