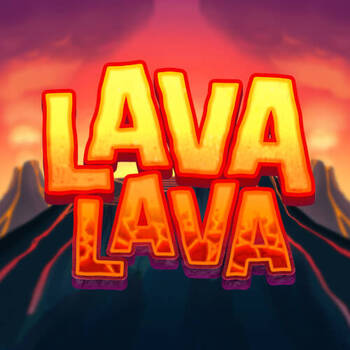 Produced by
Thunderkick
Thunderkick’s Lava Lava online slot game is played on a 5-reel, 3-row game panel which supplies players with 15 fixed paylines to score wins on. Players need to land three to five matching symbols across the grid to score a win. Apt to the game’s theme, Lava Lava is a highly volatile game, and it has four forms of RTP. Interested players should look out for the version with a 96.14% RTP, which can possibly drop to 94%, 92%, or 90%, depending on where you play Lava Lava. Learn more about this volcanic online slot game in this review.

Lava Lava, developed by Thunderkick, is an online slot game that features a 5-reel, 3-row game panel, supplying the players with 15 fixed paylines to score wins. Lava Lava is a highly volatile game with four forms of RTP, the highest of which is 96.14%, followed by 94%, 92%, and 90% on the less generous side, depending on where you play. Bets from 0.10 to 100 per spin is all players need to start playing. Whilst playing Lava Lava slot online, players must land three to five matching symbols across from the game’s leftmost reel to constitute a winning combination, giving the players a chance to trigger a cascade depending on whether the base game or bonus game is being played.

Lava Lava online slot machine starts with low paying symbols including 9-A card royals worth 3x to 5x the bet for a five of a kind win. Landing five premium symbols of a kind like tiki masks and golden flowers will win the player worth 10x to 30x their stake. The game also features wild symbols to replace regular paying symbols. Landing five of these will win the player 30x their bet, and a sticky quality once free spins are triggered. Lava Lava steps up its potential with a claimed max win figure of 10000x the player’s stake.

Lava Lava online slot features Wild symbols that can not only replace regular pay symbols, but can also apply multipliers to wins these are a part of. With 1, 2, 3, 4, or 5 wilds on a payline applying multipliers of x2, x4, x8, x16, or x32, the more is definitely the better.

Visible Scatter symbols can explode and as a result remove all other symbols, not including Wild or other Scatter symbols. A bonus meter collects these Scatters to trigger free spins - 3 Scatters for 10 free spins from the base game or a retrigger of 5 free spins when the bonus game is already active.

While playing the base game of Lava Lava slot machine, Scatter symbol explosions can allow existing symbols to drop down to fill in the spaces, potentially landing the player with new wins. During the bonus game, however, each winning line will dramatically explode from the reels to be replaced by new or existing symbols that drop from above. As long as there are new winning combinations or scatter explosions, the avalanche feature will continue.

Genting Casino offers a wide variety of games, including the Lava Lava slot game. A great collection of table games and live casino games can be seen on the site. Those interested can play Thunderkick’s Lava Lava game from the comfort of your home on your smartphone or PC. Experience the sticky quality of wild free spins and their multipliers, explosive scatters, and the avalanche features of Lava Lava slot when you log in to the Genting Casino website.