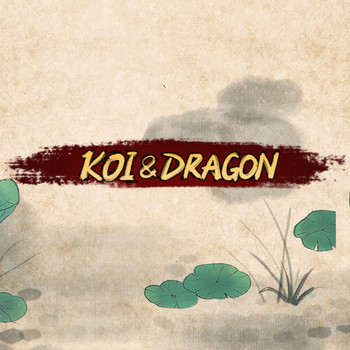 About Koi and Dragon

The game's theme is based on legendary Chinese mythology – The Dragon Gate. The Koi fish competes every year to leap over the Dragon's Gate falls in this story. Despite the fact that it failed, it never gave up. The gods were so impressed by the fish's perseverance and strength that they changed it into the Golden Dragon. We recommend that you be as determined as the Koi fish to win big in this Koi and Dragon game. The majority of the story's enchanting elements are represented in the game as symbols.

When you play Koi and Dragon you’ll find an Asian girl, a white flying bird, a lotus flower, and a sky lantern are among the five high-paying symbols. Aside from these, you'll find low-valued symbols made up of the card suits 9, 10, Jack, Queen, King, and Ace. The Orange Dragon represents the wild symbol in Koi and Dragon slot online. A greenish-blue Moon appears on reels 1, 2, and 3. The orange and white fishes circling in a yin-yang pattern represent the scatter symbol.

The Koi and Dragon have a few unique features. The Yellow Dragon icon replaces the Orange Dragon wild symbol in the base game. Except for the scatter symbol, the yellow dragon can replace all icons. The moon symbol can bring you a monetary reward. The Re-spin is triggered by two or more scatter symbols.

Koi and Dragon at Genting Casino

You can play Koi and Dragons slot at Genting Casino. Big Wave Gaming's Koi and Dragon online slot is a fantastic game. The game features included in the base game will keep you entertained. With the free spins feature first, and then the Dragon Gate feature with two jackpots, the re-spins feature is your ticket to bigger payouts. The Grand and Major Jackpots are not easy to win. However, there are opportunities for good returns in the base game.