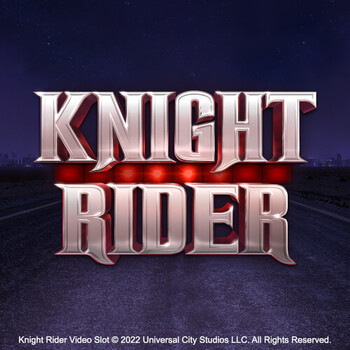 Produced by
NetEnt
David Hasselholf fans would know him best for his leading role in the 90’s series Baywatch, but real fans would know that the hunky lifeguard actor got his big break as Michael Knight in the 80’s show Knight Rider, which ran from 1982 to 1986. NetEnt brings that nostalgia back in the form of the Knight Rider slot game. The slot game features characters from the show such as its namesake Michael Knight and his artificially intelligent talking car, KITT (Knight Industries Two Thousand). Fans of the show will find this game a real treat especially since the show’s theme plays in short bursts when the reels spin in the base game. The theme plays freely, however, during the bonus game. Along with the nostalgic soundtrack, the Knight Rider slot machine also features voiceovers from Michael Knight and KITT themselves and an intro clip pulled directly from the show itself. Learn more about this nostalgic slot game in this review!

NetEnt’s Knight Rider game, based on the 80’s show of the same name features a 5 reel, 4 row slot layout. This highly volatile slot game gives players a 26 fixed payline game panel that hosts the action, with KITT just sitting on the side, all set in the middle of a desert. In the Knight Rider online slot, players can create wins by matching three to five symbols that land across one of the game’s 26 fixed paylines, starting from the leftmost side. With a default return to player value of 96.07%, those interested can bet a minimum of 0.20 to a maximum of 40 for a chance to win up to 7000x their stake.

As for the symbols in this slot game, Knight Rider features lower paying symbols that are represented by 10 to A symbols worth 0.5x to 1.5x the bet for five of the symbols. Higher paying symbols are represented by symbols based on the show itself: watches, steering wheels, trucks, and even KITT’s red light and of course, Michael Knight himself. The game’s Wilds can replace any pay symbols to complete wins but these also come with multipliers.

The Turbo Boost Feature of Knight Rider is a side feature that may randomly trigger in the main game, adding 3 to 4 walking multiplier wilds on the game’s reels when it is activated.

Players that can land 3 Scatter symbols on reels 2, 3, and 4, in the main game can activate up tp 10 free spins. When the game’s special knight symbols land during the free spins, they are collected. Players can move up a level for every 3 symbols collected. Each new level can award the player and additional two spins along with one extra laser Wild. The current number of laser wilds can be randomly added at the start of each free spin. Level 4 is the highest level a player can get to where 3 laser wilds are added on each spin.

Get a chance to experience this blast from the past slot game, as well as a huge collection of table games and live casino games when you visit the Genting Casino website. Fans of the action-packed cult classic can play Knight Rider slot and meet a young David Hasselholf as Michael Knight and his artificially intelligent talking car KITT in this slot game for a chance to win up to 7000x their stake. Come play Knight Rider when you log in to the Genting Casino website!