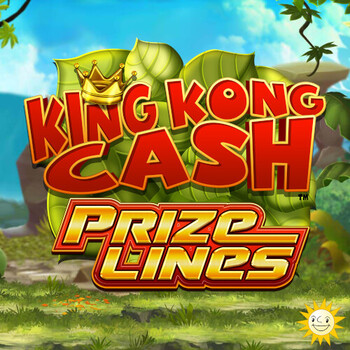 There’s no time to monkey around! It’s time to make your way to the middle of the forest and meet King Kong himself with a game of King Kong Cash Prize Lines. Set on a 5x5 grid with an Return to Player value of 96.03%, you can win up to 50,000x your bet.

The way to play is by spinning the reels to complete lines. You have 5 initial spins for every paid round but you can also buy extra chances. The price of each spin depends on the bonuses you trigger. You can see the bonus meter on the right side of the screen, and see how many spaces you have to climb to win even more prizes.

There are 7 bonus features such as: King Kong’s Cash where Kong smashes his hammer on the reel and gives you a cash prize, Rumble in The Jungle where you pick between multiple Kongs to win a prize, Golden Monkey where picking golden monkeys award you cash prizes, Barrel Blast where you pick and match 3 items to win an upgradable bet multiplier, and Go Bananas where you get 3 picks to get cash prizes or extra chances.

There’s also the Multiplier Trail where you can reach up to Level 2, and then you reach the Big Monkey Bonus. Here, you pick barrels to move up the trail and increase your total bet multiplier as you go. There are certain directions this feature can lead you to such as further up the trail,  a bomb to end the feature, or going all the way to the Big Monkey end game. Here, you’ll see Kong himself in the middle of barrels and bananas. A Bonus Wheel will spin and you can get cash prizes. You can get a golden monkey which means respins with higher prizes or a Bomb that will end the feature.

This game is all about multipliers and bonuses, so you get to test your luck and see where it’ll take you. Make sure to stick to your budget though! Play King Kong Cash Prize Lines on any mobile device now with Genting Casino.