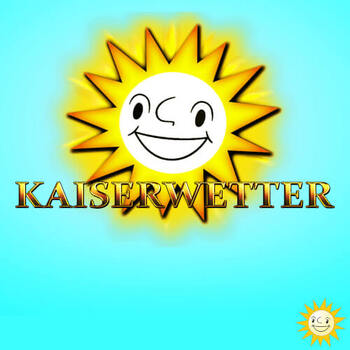 Kaiserwetter is a German word that translates as Emperor Weather. It describes a day with plenty of sunshine and a pleasant temperature, ideal for going for a walk (weather good enough even for an emperor). On the reels, we see nothing of the sort, only an image of the Sun that appears when you win big. Given the title, this was disappointing. Kaiserwetter slot is an interesting game, especially for experienced players who are used to being disappointed by traditional slot machine design. It compensates for its few lines, only 10 available on 5 reels, by including an extra feature that expands the game area to 27 lines and by delivering big wins, up to 800x the stake per line (8,000x per spin, potentially). The Return to Player rate is 96% which is acceptable on a slot machine game.

With just one winning combination, the game can produce wins of up to 800 times the initial bet. In that capacity, the Seven symbol is used. Considerably better, there are 27 lines available during the free spins, making it even simpler to get paid at that stage. You begin by selecting the wager and then pressing Spin. The betting range is between 0.10 and 20. Seven, Star, Bell, Grape, Watermelon, Strawberry, Plums, Oranges, Lemons, and Cherries will all be symbols used by the game. A random occurrence where the Sun appears and activates the bonus feature known as Kaiserwetter may occur at some point. It will increase the number of lines from 10 to 27, and it will also increase the odds of winning by making some symbols wild. The Seven, Star, and Bell symbols are the ones that turn into additional wilds.

To be part of this fun game, register at Genting Casino available on all mobile and desktop devices and remember to play moderately.