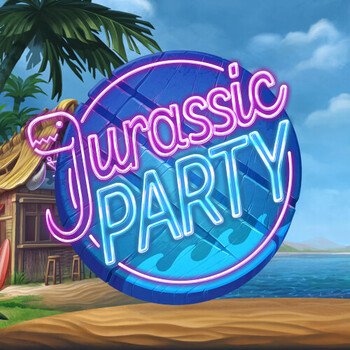 The prehistoric behemoths that ruled the land are here to make Relax Gaming's newest hit. Dinosaurs ruled the world before a speed bump in the evolution timeline. With the representation of these creatures grazing the lands, Jurassic Party brings them to a different setting. The prehistoric lizards are hitting the beach this time. A chance to land a 20,000x win or the possibility to enter a multiple choice Free Spin round where each bonus unlocks a twist. From symbol transformations and upgrades to extra wilds on the reels help increase wins. A chance to win with real potential is here.

The game's 7x7 grid is set in the middle of an idyllic location. Paying out when clusters of 5+ identical symbols land in vertical or horizontal adjacent positions. A cascade feature drops symbols to fill the gaps. New wins repeat the process. The game sits in a highly volatile manner and produces a return to player value of 96.47%. Jurassic Party is playable on any device whether on mobile, tablet, desktop, or laptop. The paytable has 8 regular symbols made up of four high-pay dinosaurs and their four low-pay egg symbol counterparts. Landing five symbol clusters is worth 0.5 to 1x the bet, all the way up to 50-500x for clusters made up of 40+ symbols.

Neon symbols serve as the scatters and landing at least 3 of them awards 7 Combo Feature Free Spins with 2 feature picks. Players are also presented with three cocktails where they pick one. Repeated based on the number of feature picks achieved. 2 scatters at the end of the spin reward a respin with at least two random features activated. Engaging the Mega Bet will increase the stake by 50%. Journey into the forgotten world and earn big. Play now with Genting Casino.