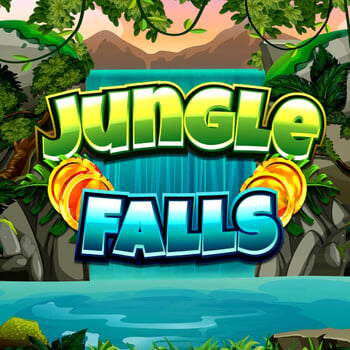 Produced by
Inspired
Jungle Falls slot plays out on a 6×8 waterfall grid, and here five to about 20 matching symbols become automatic wins. Whereas animal modifiers can trigger at random times to ensure that the cascading wins are going, a top reel will offer cash coins and a dropping wild. This can lead to cascading bonus trail coin collect modifiers, as the bonus round takes the ultimate lead.

The Payouts and Symbols in Jungle Falls

It is important to note that this slot machine uses a cluster pays gaming engine. This implies that when a players play Jungle Falls, they can create winning combinations only by landing clusters of not less than five similar symbols, connected either vertically or horizontally. In this particular title, there are six regular symbols, and the Blue Raspberry is the first on the list.

It will assist the player in earning between 0.1x to 10x the total bet. The lime and the plum are the next on the line. Creating winning clusters with at least five of these symbols will offer prizes that range between 0.15x and 25x the placed bet. In addition, Jungle Falls slot online paytable also has orange and raspberry symbols.

There are certain coins that offer multipliers, and there is also a green wild symbol, which still counts as any regular icon. As it would be the case, these symbols might fall down on the grid once a new winning combo is obtained. Additionally, the winning cascades will light up the panels in a five-stage trail. To play Jungle Falls slot is really fun.

The Jungle Falls video slot comes with several thrilling bonus features. In the case of the Cascades, for instance, the prize is awarded after every win as the winning symbols are taken away, and replaced with the new symbols. This game also has a Top Reel, where the symbols shown there shift one position towards the left with each new spin.

Once all the cascades have been processed, a particular bonus will be obtained, and the panels will be activated to either stage three or five. Stage three, for instance, makes the coins drop one position, and more coins will be expected on the grid. On the other hand, the fifth stage offers more coin and maximizes the opportunities for instant wins.

The other thing that makes this slot awesome is that it's possible to activate one of the available animals symbols after each cascade. There are three animal symbols that will offer modifications, which will help in winning prizes. Its RTP gives the player hope of a solid payout percentage of 95.18%. The provider has, however, hid the variance level of this game.

In summary, the base game modifiers for Jungle Falls are almost inclined towards earning the player coin wins, and the animal features can also help when it comes to cascading the sequences once in a while. In the bonus round, the progressive win multiplier will take everything to a new level in the bonus round, which is a good thing about the game.