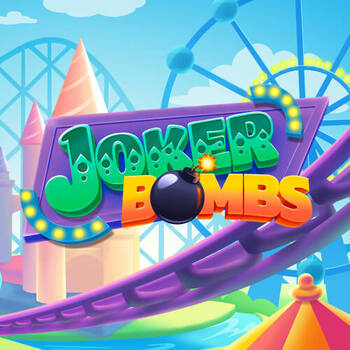 Come and see the colorful world of Joker Bomb!

Joker Bomb has a six by five game panel. Rewarding combinations come when at least 8 matching symbols appear on the game grid, regardless of where they land, sort of like scatter symbols. The lower part of the paytable features five balloons of varying shapes. When fifteen or more are visible, they can be worth up to 5X to 15X your wager. The four premiums that resemble candy are worth 50X to 200X the stale when fifteen or more symbols appear on the reels. There are no wild symbols present to go with the scatter pays.

One feature in Joker Bomb are cascades. When combinations are formed, the involved symbols are removed from the reels, letting the remaining symbols to drop into the spaces left by the removed ones.

Another feature are Multiplier Bombs, any combination reward is shown as a pending win amount at the top of the screen throughout each spin. The multiplier values of any bomb symbols that land during the spin are added together. There are three types of bombs, the Normal Bomb has its multiplier visible. This bomb can double, triple, or quadruple your stake, this adds value to the win multiplier. The Revealing Bomb lands with a question mark on it and reveals if your stake has been multiplied by five, ten, twenty-five, or fifty, this bomb adds to the win multiplier. The last bomb is the Epic Bomb, it lands with an “x” on it and reveals values of times two, times three, times four, times five, or times ten. Unlike the other bombs, the value is not added to win multiplier but multiplies it.

For Free Spins you must land at least three jack in a box joker symbols. It rewards you with ten free spins. During these free spins there are more multiplier bombs. If you land another three, on any part of the grid you get five more free spins.

Play Joker Bomb on Genting Casino, it is accessible for any mobile device. Set your gaming budget and adhere to it.