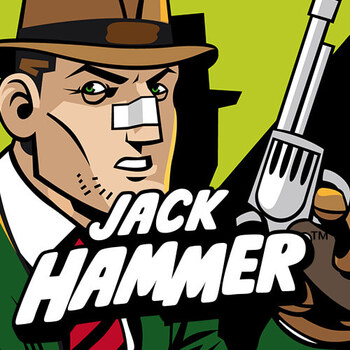 Produced by
NetEnt
Join a famous private detective in his exciting mission with the Jack Hammer slot, a release from NetEnt. Incorporating a comic book theme, this five-reel, 25-payline slot game comes with a range of features that are quite lucrative. They include scatters, wilds, respins, the Sticky Win feature, a Free Spins round and a maximum payout of up to 750,000 coins.

Go on an investigative mission with the Jack Hammer slot

Players can play Jack Hammer slot on a grid that has 5 reels, 3 rows and 25 fixed paylines. Wins are generated by landing multiple symbols of a kind on the grid from left to right, beginning with the far left reel. Additionally, the game comes with 96.96% RTP. This rate is quite favourable considering that it is above the average for a standard machine.

Jack Hammer slot online is available to play on any device with a wide betting range. Bets start with as low as 0.25 coins per spin and rise all the way to a maximum of 250 coins. This investigative mission comes with low volatility. Apart from that, it offers a maximum win of 750,000 coins that is highly attainable during the free spins round.

Players will find a comic book theme when they play Jack Hammer slot. On the reels, there are low-value symbols such as flasks, phones, newspapers, and airships. They are joined by premium symbols namely a woman, a paperboy, Doctor Wuten and Jack Hammer himself. In addition, there is also a wild symbol that substitutes all regular symbols except the scatter.

The Jack Hammer video slot comes with two potentially exciting special features. The first one is the Sticky Win feature, which is quite unique and can deliver hot action. It is triggered each time a winning combination is created on the reels. When this happens, the participating symbols lock in position until the next spin. This can greatly increase the game's winning potential.

If another symbol or wild lands, it will also lock in position and the process starts again. The feature continues until no new winning combination is formed. Consequently, the game calculates and awards a payout depending on the number of winning symbols. The second feature is the free spins feature. It is activated by landing at least 5 scatter symbols on the grid.

More scatters means more free spins. Breaking it down, landing 5, 6, 7, 8 and 9 scatters will award 10, 15, 20, 25, and 30 free spins. Although landing the 9 symbols to get the maximum number of free spins is a bit difficult, it's still possible. Nevertheless, no matter the number free spins awarded, all payouts during this feature will be enhanced by a 3x multiplier.

There is a lot to like about the Jack Hammer video slot. The comic book theme and design works very well and is complemented by the jazzy soundtrack playing in the background. Concerning features, the Sticky Win feature can deliver good payouts because winning symbols always lock for the next round. Having said that, players can access and play this game here at Gentingbet.