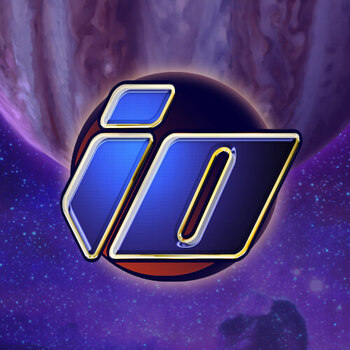 Produced by
Elk Studios
The IO slot has a space theme because it is based on a casino space station that is taking a trip through the solar system. The visuals are simple and dominated by the colour purple, with the solar system as a backdrop. Low-value A, K, Q, and Js are among the symbols that appear on circular circles. There are also stars, four-leaf clovers, diamonds, and fortunate red 7s to be found. The lucky red 7 symbol is the most profitable, paying you 1, 2, 3 or 5 times your stake when three, four, five, or six appear in a row.

ELK Studios created the IO slot game, which features 6 reels and 4,096 ways to win. With a space theme, you may go to Jupiter for as little as 0.20 or as much as 100. After a win, symbols are drawn to the left and right on their journey downwards, using gravity mechanics. Each win also adds a row, bringing the total number of ways to win to 262,144.

With the Avalanche function, IO includes a Charged Wild, which has four extra lives that are lost if the game is won. The Wild Forge boosts the multiplier wild, while the Laser causes symbols to change into wilds. Then there's the Bonus Game, which awards free spins with charged wilds and wild forge symbols accumulated at the bottom of the screen in between them. The Io Slot Machine features a 96 percent RTP and a maximum win of 5,000 times the bet every spin.

Along with the ordinary Wild, there are two exceptional Wilds. The first is the Charged Wild, which has four lives to begin with. It remains on the game area for the duration of a full reaction sequence, and it loses a life each time a Charged Wild is used as part of a win. It vanishes from the grid once all four lives have been used up.

When a Wild Forge appears in Io Slot Online, it creates a multiplier wild in the vacant space beneath it. The multiplier's value grows with each use of the Wild Forge, and there's no limit to how high it can go. The Wild Forge becomes a wild multiplier if it falls to the bottom of the grid.

When the laser symbols fall, they fire a beam of light that destroys themselves as well as any regular symbols in their path, allowing new ones to fill in the gaps. When two laser symbols' beams collide, the symbols along the beams up to the point of intersection become Wilds.

Io is playable at Genting Casino. You can play the Io Game at the comfort of your own home or when on the road whenever you feel like putting a few spins in. Genting Casino allows you to play and offers a wide selection of table games, live casino games and slots. Io has a betting range that fits every player's play limits. It is a highly engaging game that can also be highly rewarding with a 5,000x max win. The unique gravity gameplay can get new players and older ones interested.