Play Into the Storm 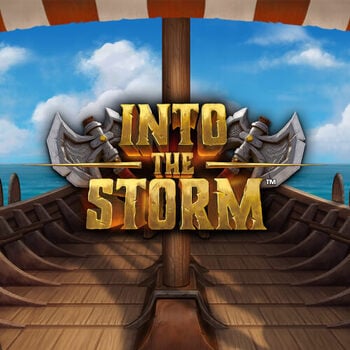 Board the Viking Longship, sail into the raging seas, and find treasure along the way in SG Digital's online slot game called "Into the Storm." The slot game is played on 5 reels, 3 rows, and 20 pay lines. Into the Storm features two RTPs which are 96% by default and you can also choose an RTP of 94%. The game doesn't have a hit frequency. The player lands a winning combination by getting 3 or more of the same symbol type on adjacent reels starting on the far left. The maximum win is at 10,500x your total stake. Into the storm has engaging audio and visuals that are playable on mobile, notepads, and desktop.

Into the Storm has Viking-themed slot features. The low-paying symbols are colored blue, yellow, green, purple, and orange. The high-paying symbols are a Viking helmet and three Vikings colored green, purple, and red. Other features of the slot game are the Walking Wild Respins (randomly triggered on any base game spin), Krakens (also lands on regular base game spins), and Into the Storm bonus (played on a 9x5 sized grid with 3 starting spins). There are also four different modifiers placed under Into the Storm bonus. This includes the Kraken zone (have a multiplier of either 2X, 3X, 4X, or 5X), Hammer (random multiplier will be doubled), Treasure Chest (This collects all the golden multipliers in the bonus round), and Viking Coin (increases the number of respins to 4 during the bonus game). Lastly, you may use the Bonus Buy feature if you want to use the In the Storm bonus instantly. The RTP will be unchanged when using this Bonus Buy.

Be ready to journey the Viking Seas in SG Digital's Into the Storm! This slot game is playable on all mobile devices.