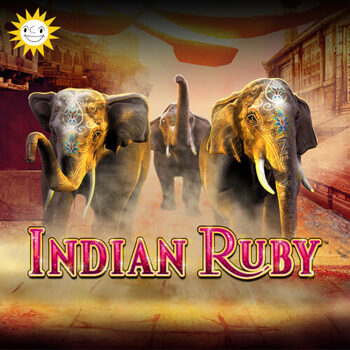 Produced by
Merkur
Go in search of the high-paying Indian Ruby in this slot and you could walk away with as much as 10,000x your stake! Trigger the Stampede feature to increase your potential wins with stacked Elephant symbols. And try to increase any win with the Gamble option, whether you climb the prize ladder or predict the colour of face-down cards. There’s lots to discover in Indian Ruby — give it a spin today. 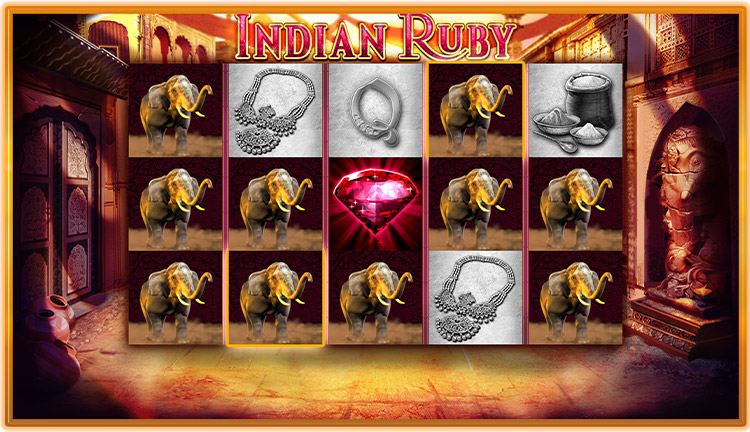 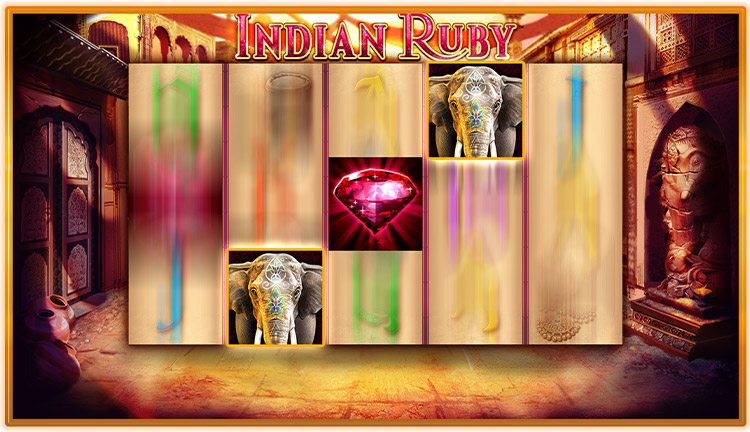 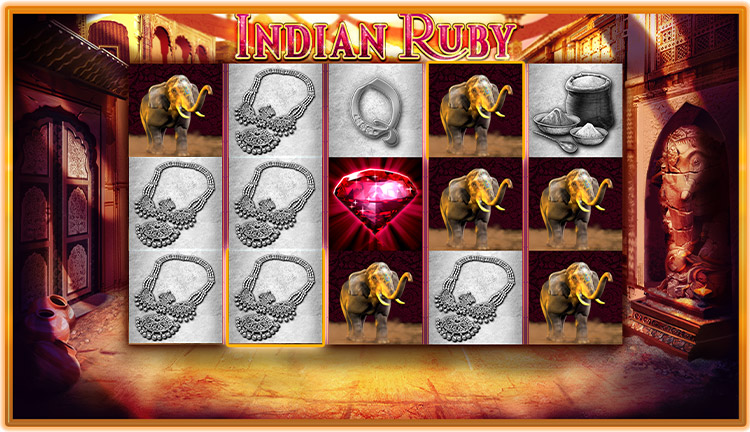 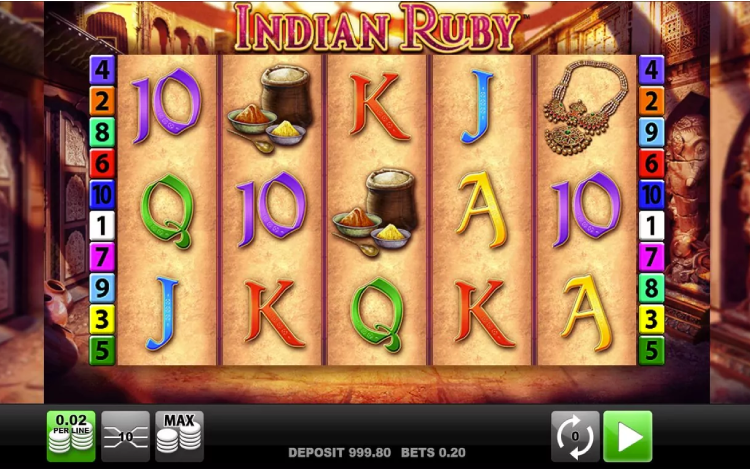 Indian Ruby was released by Merkur Gaming in 2019. Merkur Gaming has released a wide range of online titles, including 221B Baker Street, Black Hole, Centurio, Egyptian Diamonds, and more. Indian Ruby is played on a 5x3 grid, and looks terrific on devices of all sizes, from desktop computers to smartphones.

As this game is inspired by India, its background depicts a street with traditional Indian architecture and golden sunlight. And an interesting range of detailed symbols, including spices and jewellery, appear on the reels with each spin.

Indian Ruby’s Wild symbol is a Ruby. This substitutes for all other symbols and doubles any win it forms part of.

The Elephant Scatter triggers the Stampede feature (a re-spin) if 2 or more appear on the reels. It also awards payouts for any 2, 3, 4, or 5 that land, with up to 1,000x your stake available.

Any Wilds and Scatters on the reels stay in place while the rest of the symbols spin again. Scatters may become stacked during this round.

The Gamble feature is available after any win. You can either play one of two Gamble games or collect your winnings via the COLLECT button, which will take you back to the base game.

Press the button marked with card symbols to play this bonus game. You’ll be prompted to predict the colour of the next card in a hand to be revealed: tap either the red or black button to choose. If you guess the card’s colour properly, you’ll double your win!

Press the ladder button to try this bonus game.

You’ll be presented with a ladder featuring several steps, each marked with a different value. Press the 1:1 button to either move up or down a step and receive the corresponding prize. You may increase the size of your initial win or forfeit it depending on which step you land on.

The Indian Ruby slot game features simple controls and a layout that should feel familiar if you’ve played a Merkur Gaming slot before.

To play Indian Ruby, press the SPIN button (featuring a “play” symbol) in the control panel. The reels will spin for a moment and stop to reveal a set of random symbols, which may or may not include enough matching symbols to form a winning combination on one of the 10 paylines.

If you can’t match enough symbols to win, you’ll be able to hit SPIN and try again. But if you land 3, 4, or 5 identical symbols on a payline, Indian Ruby will award a prize as per the paytable.

Next, you’ll have a chance to use the Gamble feature to try to increase your winnings and claim a bigger prize. But if you would rather collect your win and carry on spinning, you can do that instead.

You can increase or decrease the number of active paylines, too. Press the button marked with a “10”, next to the MAX button, to open the paylines settings, and tap any of the numbers between 1 and 10.

Other controls are available at the top of the screen. Press the icon featuring the dollar sign to open the paytable or the “i” to read the rules. Both pages make great starting points if you’re playing the Indian Ruby online slot for the first time.

What is the maximum bet for Indian Ruby?

What is the minimum bet for Indian Ruby?

You can start betting from 100 coins.

Can I play Indian Ruby on mobile?

You can play the Indian Ruby slot machine on mobile devices.

What is the RTP of Indian Ruby?

What is the biggest potential win for Indian Ruby?

The biggest potential win available in Indian Ruby is 10,000x your stake.

About the Game Provider: Merkur Gaming

Merkur Gaming is based in Germany and is a subsidiary of the Gauselmann Group, a globally recognised gaming conglomerate created by Paul Gauselmann in 2012, with 12,500 employees in over 40 countries and a net worth of €3 billion (£2.78 billion). Merkur owns and manages a number of land-based and online casinos, as well as a social casino that focuses on having fun rather than winning money. It is mostly concerned with highly regulated markets and legitimate practices, making safe and responsible gaming practices at the core of Merkur's developments. Merkur has a wide range of themes to choose from, often putting a unique spin on a well-known genre. It's also responsible for some very unique features like the gamble feature, which can be found on many older slot machines, and the Re-win option. Popular slot machine games created by Merkur include Magic Mirror Wild, Egyptian Diamonds, and Defenders of the Monastery.

Play Merkur Gaming’s Indian Ruby slot online for a chance to win up to 10,000x your bet, try to grab bigger and bigger wins with the Gamble feature, and see if the Stampede feature can help you. Discover all this and more in Indian Ruby at Genting Casino.

We also have an extensive collection of other slots, table games, and live casino games for you to try, so sign up and start spinning!