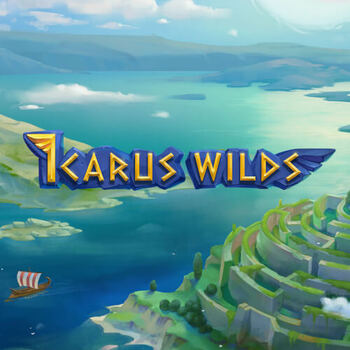 If there’s one thing to learn in Icarus’ story, it’s to do things in moderation. He escaped prison and flew to freedom. But, he flew too high and set his wings on fire, and he ended up falling to the sea. With a game of Icarus Wild, you get to battle against destiny and try your luck, so that you can put a different ending to his story.

Set in a 5x3 reel grid, you’ll see the view of Ancient Greece while you’re suspended in the air -much like Icarus in what was his moment of freedom. The game has a medium to high volatility model as well as a Return to Player of 96.54%. You can win by matching 3 or more symbols in 1 of the 243 winning paylines.

As you can see from the title, this game heavily features Wilds. There are three kinds that can land on reels 2-5 and substitute for any paying symbol. Nudging Wilds move up a row for every spin until they exit the grid, if they appear on top, they only last for one spin. Multiplier Wilds move up similarly but apply a 2x, 3x, or 4x win multiplier. Locked Wilds will be locked for the amount of spins that will appear on the upper-right corner, before moving up like the other Wilds, staying on your reels longer.

Landing 3 gold coin Scatters can trigger the Icarus Free Spins bonus. Here, an extra row will be added, increasing the winning paylines to 1024. A Wild symbol appears on the bottom row, and this feature continues until there is no more Wild on the reels.

Take charge of your own destiny and keep flying to freedom. Icarus Wilds is playable on any mobile device with Genting Casino. Set your budget and spin away, but remember to stop before you get too close to the sun!