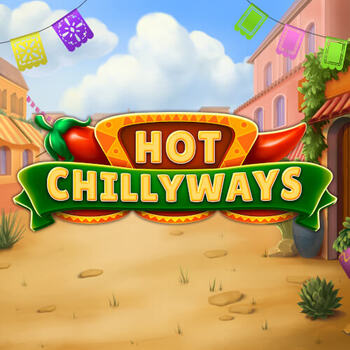 Produced by
StakeLogic
Hurricane Games' Hot Chilliways game is a risky Mexican-themed slot machine that has 729 win lines and a 6x3 default grid. Up to 117,640 chances to win are conceivable thanks to the varied ways that Green and Red Chilli Wilds expand the reels. In the main game and the bonus round, the Red Chilli additionally increases the global win multiplier by +2 and up to +100, respectively. The top prize is 30,000 times your wager. Play Hot Chilliways for 0.20 to 10 per spin.

In addition to being a Stakelogic creation, Hot Chiliways slot game is also a joint venture with Hurricane Games. This game, which incorporates aspects of Mexican culture, features 6 reels and 2 to 7 rows. There can be a minimum of 729 paylines active and a maximum of 117,649 paylines.

Despite the fact that the aforementioned information classifies it as a Megaways release, the payline system still enables players to win by placing a minimum of three identical symbols on a payline that runs adjacently from left to right. It can be a lot of fun to play a game with the Wild Red Chilli, Wild Green Chilli, and Free Spins feature.

We'll look at the special symbols in the Gameplay and Features section. The game has two wild symbols that serve different purposes in the game.

The Hot Chilliways slot online RTP is set at 96.18 percent, which is higher than the 96.0 percent industry norm. The volatility is set to a medium-high level, producing infrequent but significant rewards.

The game's betting range, which runs from 0.20 to 10, looks limited and only works for low wagers. The top win possibility is up to 30,000 times the initial wager, which is excellent.

There are two distinct Wilds in the Hot Chilliways online slot. A sophisticated bonus round, cascades on each win, and a bonus buy option are also included.

When three or more matching symbols appear on consecutive reels from the far left to the far right, starting at the very left, you win. The premium symbols pay between 1.5 and 10 times your wager for six of a kind wins. Winning symbols are replaced by new and/or existing symbols that drop from above using the cascading principle. As long as you keep winning, this cycle will continue.

Your standard wager size is doubled with the Super Stake ante bet, but your chances of winning the bonus round are also doubled. But the Wild Chilli symbols in this game really steal the show.

The Green Flaming Chilli, including itself, divides every sign on the reel it lands on. For the impacted reel or reels, this brings the total number of symbols to 6, which raises the total number of win ways. The green chili then performs the function of a wild, which means it replaces pay symbols to aid in the completion of wins. The next spin results in a complete reset.

Similar to the green chilli, the red flaming chilli creates seven spots on its reel as opposed to six. 4 new positions are produced on top of the previous 3 slots, which fall to the bottom. The red chili then transforms into a wild and boosts the overall win multiplier for that spin by two.

When three, four, five, or six scatters appear simultaneously, the bonus round is activated and you are given 12, 16, or twenty-four free spins, respectively. If you would like, you can select to wager more free spins up front. This is done on a wheel with red and green segments. If you do, you run the danger of losing the entire feature, so take cautious.