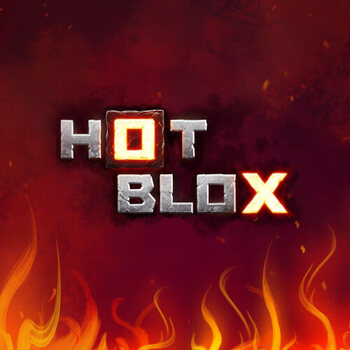 Think outside the box, they said. And with a game of Hot Blox, the gamemakers certainly delivered. Discover a new way to spin, and explore a slot gaming experience unlike any other. Let's have a tour, shall we?

Imagine a regular grid with 3 rows and 3 columns, this makes 9 slots right? These slots are called Bloxes. Each Blox has a 2x2 reel grid inside where the symbols appear. Four symbols appear in each Blox, and if you land 4 of the same symbols in one of them, these symbols will fuse together to fill the entire Blox that it's on.

The goal for this game is to land 3 or more matching Bloxes in any position on the reel. Bloxes are also charged in every spin. You get certain multipliers depending on the number of charged Bloxes part of a winning combination. You can get boosted 2-100x in value.

The game has a volatility level in the highest variance, as well as an overall average payback of 96.0%. It's a game that's truly hot, it's up to the thrillseekers and the risk takers to try and put out the fire.

You can start your bet at 10 to 10,000 coins and you're ready to spin. Just try not to get yourself burned and make sure to stick to your budget.

Hot Blox is available to play on any of your mobile devices with Genting Casino.