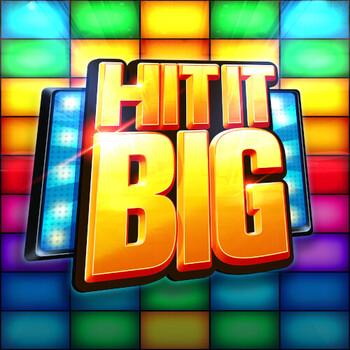 Produced by
Elk Studios
ELK Studios' Hit It Big slot is a 5-reel, 5-payline slot with a retro/game show theme. You can take advantage of stake multipliers, respins, stacked wilds, and locked wilds with three respins in addition to the excellent graphics. With three stages to complete in the primary bonus feature, you can win cash prizes. The Hit It Big bonus level gives prizes up to 1,000 times your wager, which can result in wins of 2,500 times your wager. Hit It Big game has an RTP of 96 percent.

About Hit it Big

Five paylines and a 53 reel set are used in the Hit It Big slot game, which also has a set of Feature Buttons above and below the reels that activate when they line up.

You must first set your bet by selecting the coins button on the left side of the screen before spinning the reels. On desktop, mobile, and tablet platforms, Hit It Big slot online can be played for 0.20 to 100 per spin. The reels will begin to spin when you press the large circular "Spin" button. By clicking the button in the top left corner, you may access the "Info" section, where you can get details on the rewards for the symbols, basic game rules, and bonus features.

With 40 coins awarded for a combination of five on a payline, the green single bar symbol is the lowest-paying in the Hit It Big online slot. The triple red bar sign comes next with a 60-coin payout for five, followed by the double blue and double red bar symbols. You will receive 160 coins for landing five of the green 7 symbols as opposed to 200 coins for the blue one. With a payout of 250 coins for a five-of-a-kind combination on the reels, the red 7 is even more profitable. The golden triple 7 sign with a crown on top is the last one. If you're fortunate enough to line up five of these on a payline, the highest-paying symbol in the game, you'll win a total of 500 coins.

Additionally, the game's Hit It Big Bonus slot machine Game feature can be accessed by landing three Hit It Big bonus symbols anywhere on the reels. After three levels—the outer circle, inner circle, and Hit It Big centre screen—you'll encounter a 5 by 5 grid.

What is the maximum bet for Hit it Big?

What is the minimum bet for Hit it Big?

Can I play Hit it Big on mobile?

Hit it Big is playable on mobile.96 percent.

What is the RTP of Hit it Big?

What is the biggest potential win for Hit it Big?

Hit it Big at Genting Casino

Hit It Big is undoubtedly inventive and distinctive, but it's also very unpredictable, with the Hit It Big Bonus Game feature offering top rewards of 2,500 times your bet. Players appreciate the fact that each base game spin offers the possibility of cash rewards, respins, stacked wilds, and locked wilds. Play Hit It Big and win.