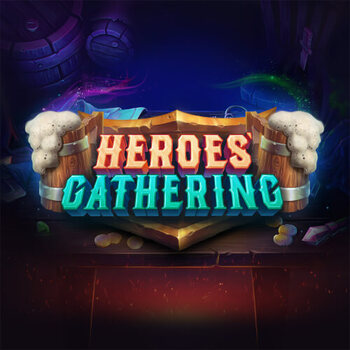 Embark on a board game based gaming experience with Heroes' Gathering. Enjoy the medieval music and an old fashioned yet properly themed tavern like experience that will transport you to the heart of the action.

Heroes' Gathering is played on a 5 reel and a 3 row area which is laid out like an actual board game. Players can start the game with a 0.10 and up to 100 per spin. Players need to land three or more matching symbols on one of the 20 fixed paylines and you have scored a payout. The game has a return to player average of 96.45%.  It is rated at a medium volatility.

To players it will seem like the game was built for the bonus round which brings tons of fun into the limelight. There will be two bonus games and the most sought after is triggered when 3 scatters are landed on reels 1, 3 and 5. The Board Game Main Feature will be brought to life giving players free spins that have no set limits. A wheel symbol is pun on reel 3 and the player moves 1 to 6 spaces around the board when a wheel symbol os landed. The game has 3 variations of amulets each with its own prize pot of bronze, silver and gold. This bonus feature specifically has loads more surprises that will engage players and keep the fun rolling. There is also a mini version of this feature known as the Board Game mini feature. When 2 scatters appear on reels 1, 3, or 5 this feature comes into play.

Heroes' Gathering is a well made and well thought out themed game that is sure to entice the casual and serious players. The game's many features and surprises will be sure to keep players entertained and on their toes. Remember to bet responsibly and to play to your comforts.