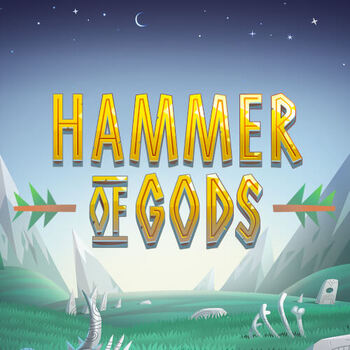 Hammer of Gods slot online is from the creative minds at Peter and Sons. It features a Viking ship full of treasure and gold. In addition, the Way Multiplier makes it more fun as random symbols are awarded multipliers.

Playing on 6×3 reels, you get 729 winning possibilities. Furthermore, rewards go up to 51,000x your bet! Winning combinations are made up of symbols. To get rewarded, create a line of at least three same icons from the reel.

Any time you land a special golden wild symbol, you affect the meter to the side of the reels which illuminates one position. Also, Re-spin feature activates when you illuminate all three positions by adding three wilds to the panel.

Way Multiplier occurs both in base and bonus games and boosts random assortment of positions. It activates when a chosen position forms part of a winning combination. Furthermore, it boosts payout with the amount of the multiplier in that position.

How to Play Hammer of Gods Slot Online

Hammer of Gods slot machine plays out with 6 reels, 3 rows with 729 winning ways. As such, you create a winning combination by landing at least three matching symbols or wilds on adjoining reels beginning with reel 1.

Hammer of Gods slot also has an RTP of 96.06%. You create winning combinations by landing at least three matching symbols or wilds on adjoining reels beginning with reel 1. These lead to triggering the Re-spin and Way Multiplier features.

What is the maximum bet for Hammer of Gods?

The maximum bet you can set is 20 coins per spin.

What is the minimum bet for Hammer of Gods?

The minimum bet you can set is 0.1 coin per spin.

Can I play Hammer of Gods on mobile?

Yes. You can play it on iOS and Android mobile platforms.

What is the RTP of Hammer of Gods?

What is the biggest potential win for Hammer of Gods?

The biggest potential win is up to 51,000x your stake.

Peter & Sons is a game developer consisting of a group of international game creators with knowledge in both mobile and casino game development. Furthermore, the developer's games have a unique feel from their innovative themes and creative characters designs.

Other than Hammer of Gods online slot, you can also enjoy the unique creativity, innovative design, and ingenious music and game sound effect by playing online slots by the Peter & Sons among others, D'Cirque, Sheriff Colt, and Johnan Legendarian.